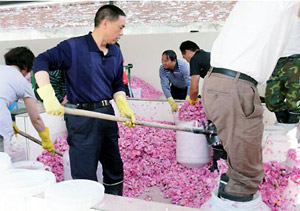 What is common with Chanel, Coty and Davidoff? Nothing, one would tend to say, as they have different fragrances and positioning. But very few know that some essential ingredients that make up most of the famous perfume brands come from Yunnan, in China. Though the province is still home to many aromatic treasures, it seems to be fast losing its edge in the global markets as rampant price wars among domestic suppliers and failure to embrace modern manufacturing techniques are fast eroding the profit margins of companies.

Situated in the southwestern subtropical zone of China, Yunnan is home to more than 400 species of natural spices. The annual output of geranium essential oil – an important ingredient for perfumes – in Yunnan is about 120 tons and accounts for half of the global trade, according to information provided by the provincial agriculture department.

Zhou Yong, general manager at Yunnan MeiJie Industrial Trade Co Ltd, says his company has supplied aromatic raw materials, through traders, to many French fashion houses such as Chanel and L’Oreal. “It requires many different fragrances to make a perfume, but ingredients such as geranium oil and michelia oil from Yunnan are essential ingredients,” he says. “You may find them in other places in the world, but the aroma is not as good as the flowers in Yunnan and it is also difficult to replicate it with synthetic chemicals. So technically speaking nearly every French perfume house uses raw materials from Yunnan.”

Though the short-term numbers look impressive, considering that exports are increasing and growth is stable, experts express concern that in the long run the prospects are not that rosy as lack of deep processing skills may hinder the further development of the fragrance industry in Yunnan. Feng Rui, director of the China Association of Fragrance Flavor and Cosmetic Industry, says Yunnan’s fragrance industry has seen a steady growth in line with the fast development of the cosmetic, healthcare and pharmaceutical industries, the key industries that use natural oil, fragrance extracts and synthetic chemicals. Industry growth may slow down if local fragrance makers are unable to develop their own skills to meet the demands from key consumers.

“Profit margins for local fragrance makers have been shrinking rapidly and are currently only about 10 percent of the total revenue,” Feng says. “Margins have been falling for Chinese fragrance companies as most of them are essentially raw material suppliers situated at the bottom of the industry chain and hence more prone to demand fluctuations.”

One person who is facing such a dilemma is Zhao Yan, the chief technician of Yunnan Emerald Essence Ltd, one of the largest fragrance companies in the province, which relies on exports to the US, Europe and the Middle East. His company reported export earnings of 200 million Yuan ($31.7 million, 24 million Euros) last year, but net profits of only 2 million Yuan. “Most of the fragrance makers in Yunnan are stagnating in the upstream of the industrial chain with the core business of making simple extracts from raw materials. International traders need to do further processing before selling the products to global fashion houses. The Chinese companies have no pricing power and this itself depletes our profits by more than half,” Zhao says. “We need an industrial upgrade in the fragrance industry, lest our profit margins be squeezed further.”

Zhou from MeiJie says that his company saw a sharp decline in turnover from 30 million Yuan to 2 million Yuan in the past decade as a result of the bitter price wars in the industry. “Many local companies are trying to gain an advantage by cutting prices drastically to sell more of their products. But they don’t realize that it causes immense financial damage to their competitors,” Zhou says, citing the example of geranium oil, where prices have dropped from 1,600 Yuan per kg to 800 Yuan. “Such actions have hampered the whole industry. Due to the price wars, many fragrance companies had to shut shop, while several others had to curtail production.”

Zhou Tiesheng, director of the Yunnan Flavor and Fragrance Research and Development Center, says the way out for the companies is to move up the value chain by imbibing more scientific research and output techniques along with launching more medium- and high-end products. “For a long time Chinese fragrances companies have failed to invest in important techniques for extracting aromatics to move up the value chain,” Zhou says. “At present, China’s fragrance industry is still in the growth stage and the industry concentration needs to be enhanced further. When raw material prices fluctuate, companies need to focus more on brand building, technology and upstream resource management.”

One good example that many Chinese companies can learn from is Firmenich Aromatics Co Ltd, the world’s second largest manufacturer in the perfume and flavor business. The Geneva -based company has been investing an average more than 10 percent of its returns on technology and product development. Alex Kuo, general manager of Kunming Firmenich Aromatics Co Ltd, says the privately owned Swiss company has done a lot of sensory tests on Chinese consumer preferences to cope up with requirements from those like Procter & Gamble, Unilever and L’Oreal. “The company will step up R&D investments in the next five years to keep pace with the competition and also find ways to gain a competitive edge in the market,” Kuo says.

Santo Akirako, general manager of the Yunnan Tsubaki project at Shiseido China Research Center, also stresses on the need for further R&D in the industry. “Our company has been spending millions of dollars on the Yunnan Tsubaki project every year, aiming to grow and extract fragrances from the camellia flowering plant,” he says. “We are extremely interested in Yunnan’s fragrances, especially camellia, and we will further enhance our scientific research investments.” The Japanese cosmetics company has so far spent 90 million Yuan to set up a research center in 2001 for projects such as camellia oil used largely in its popular Tsubaki shampoos. To move up the value chain, other Chinese companies are also making efforts by introducing foreign species of fragrances in Yunnan to meet the demand of perfume houses.

Kunming Asia Perfumer Co Ltd, among the few Chinese companies with profit margins of more than 30 percent, introduced a delicate rose species named cabbage roses from France five years ago. The extracts of the flower are widely used in perfumes and cosmetics, and cost upwards of 50,000 Yuan per kg. Lin Chengjie, president of the company, says a strong sense for the preferred fragrances by perfume houses is also very important. “Just like in the fashion industry, perfume companies also keep changing their fragrance preferences. So it’s very important to gauge the trends and be in a state of constant preparedness,” he says.

Lin’s company produced 3,000 kg of rose oil in 2011 and the entire stock fetched good prices in the international markets. “We have the advantage of cheap labor and larger farms,” he says. However, most of these things are easier said than done. Lin himself says that he is worried over the growing importance being accorded to other cash crops like coffee.

“The local government is more keen on growing the GDP,” he says. “Since the fragrance industry is still in its infancy, we can expect very little support from the government.” The next step, Lin says, is to put more money in breeding new species and launching products like natural oil, soaps and other aromatic products. “If we are able to bridge the upstream and downstream industrial chains, it would help the companies gain autonomy and control over technologies and develop standardized production techniques,” he says.

Global Industry Analysts, a US-based market research company, predicts the global perfume and fragrance trade will climb to $36 billion by 2017, buoyed by steady growth in the Asia Pacific, Eastern Europe and Latin America. “Scents are a part of human experience from the time people awake in the morning to the time they fall asleep at night,” says Lin. “We just need to upgrade the industry step by step.”

In 2010, Yunnan's fragrance manufacturers exported $105 million (80 million Euros) worth of natural oils and fragrances of synthetic chemicals, up 20 percent from a year earlier.

This accounted for more than half of the $239 million revenue earned by the province's flavor and fragrance industry, a 15 percent growth over the previous year, according to the China Association of Fragrance Flavor and Cosmetic Industry.

Most of these exports were to destinations like the United States, Europe, India and the Middle East.

The volume of rose oil production in the world is 10 tons each year, while the actual demand is about 30 tons per year, leaving a big gap between demand and production, according to the China Association of Fragrance Flavor and Cosmetic Industry.