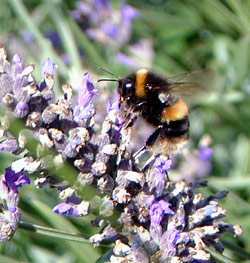 Honeybee workers use smell to recognize the species they collect nectar from, so the fact that air pollution disrupts their sense of smell is extremely worrying. Not only are honey bees vital for the production of honey, but they also help to pollinate plants whilst they are foraging. If bees are unable to locate plants they won’t be there to pollinate the 70 percent of crop foods around the world that they normally do. Amazingly, this figure accounts for about 35 percent of the global food supply.

The following research revealed that within one minute, diesel fumes significantly decreased the odour of several key chemicals responsible for bees locating oilseed rape, including a-Pinene, d-3-Carene, a-Terpinene, p-Cymene, a-Farnesene, and linalool. Those of you who know something about the chemistry of essential oils will recognize that these components are present in many essential oils also.

Therefore, it seems likely that air pollution could affect the ability of bees to act as pollinators for many of the plants used to produce our beloved essential oils. As we now know, global honeybee populations have dramatically declined over the past ten years due to a condition called Colony Collapse Disorder. The use of synthetic chemical pesticides and other man-made materials has been blamed by some experts for this condition, but as yet the claim remains unproven.

This latest research shows another, more ominous threat to the bee population that could threaten not only the production of food crops, but also the medicinal plant crops and flowers we rely on for essential oils.

Exposure to common air pollutants found in diesel exhaust pollution can affect the ability of honeybees to recognise floral odours, new University of Southampton research shows. Honeybees use floral odours to help locate, identify and recognise the flowers from which they forage.

The Southampton team, led by Dr Tracey Newman and Professor Guy Poppy, found that diesel exhaust fumes change the profile of flora odour. They say that these changes may affect honeybees’ foraging efficiency and, ultimately, could affect pollination and thus global food security.

Published in Scientific Reports (October 3, 2013) the study mixed eight chemicals found in the odour of oil rapeseed flowers with clean air and with air containing diesel exhaust. Six of the eight chemicals reduced (in volume) when mixed with the diesel exhaust air and two of them disappeared completely within a minute, meaning the profile of the chemical mix had completely changed. The odour that was mixed with the clean air was unaffected.

Furthermore, when the researchers used the same process with NOx gases (nitric oxide and nitrogen dioxide), which is found in diesel exhaust, they saw the same outcome, suggesting that NOx was a key facilitator in how and why the odour’s profile was altered. The changed chemical mix was then shown to honeybees, which could not recognise it.

Dr Newman, a neuroscientist at the University, comments: “Honeybees have a sensitive sense of smell and an exceptional ability to learn and memorize new odours. NOx gases represent some of the most reactive gases produced from diesel combustion and other fossil fuels, but the emissions limits for nitrogen dioxide are regularly exceeded, especially in urban areas. Our results suggest that that diesel exhaust pollution alters the components of a synthetic floral odour blend, which affects the honeybee’s recognition of the odour. This could have serious detrimental effects on the number of honeybee colonies and pollination activity.”

Professor Poppy, an ecologist at the University, adds: “Honeybee pollination can significantly increase the yield of crops and they are vital to the world’s economy – £430 million a year to the UK alone. However to forage effectively they need to be able to learn and recognize the plants.

The results indicate that NOx gases—particularly nitrogen dioxide—may be capable of disrupting the odour recognition process that honeybees rely on for locating floral food resources. Honeybees use the whole range of chemicals found in a floral blend to discriminate between different blends, and the results suggest that some chemicals in a blend may be more important than others.”

Chemical odours are central to communication in insects and their interaction with the environment.

A prime example of this is the floral odours that are produced by flowering plants to manipulate the behaviour of insects and facilitate pollination.

Globally, the economic value of pollination has been estimated at 153 billion Euros per annum, with 70% of the world's principal food crops relying upon pollination, equating to 35% of global food production.

Pollinator populations are declining on a global scale6 and anthropogenic substances, such as synthetic insecticides, are implicated as key contributors to the reductions of both wild and managed pollinators.