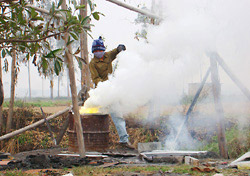 The calculations show that people impacted by the polluted sites analyzed in the report could lose an average of 12.7 years to death or disability. This measurement is called Disability-Adjusted Life Year or DALY, and represents the sum of life years lost and years lived with disability.

The report also reveals that, contrary to popular belief, most toxic hotspots result from poorly regulated, locally owned small- and medium-scale operations, rather than large multinational corporations. The report offers the most targeted picture of pollution’s toll to date, and is a crucial step in prioritizing life-saving cleanup efforts

The World’s Worst Toxic Pollution Problems 2011 report is the latest in a series of annual reports documenting global pollution issues. Since 2006, Blacksmith’s yearly reports have been instrumental in increasing public understanding of the health impacts posed by toxic pollution, and in some cases, have compelled cleanup work at pollution hotspots. Blacksmith reports have been issued jointly with Green Cross Switzerland since 2007. The 2011 report, as well as all previous reports, are available online at www.worstpolluted.org.

“This report shows pollution’s toll in real quantifiable numbers, allowing us to identify which sites have the most at-risk populations and which pollution problems and toxins cause the most damage,” says Richard Fuller, president, Blacksmith Institute. “Using the same methodology, we intend to calculate health impacts for all the polluted sites and problems in our database so that can prioritize our cleanup efforts in order to save the most lives.”

The 2011 report uses data collected by Blacksmith Institute over the past three years during site assessments at thousands of toxic hotspots in low- and middle-income countries. Drawing from this body of research, the report is able to isolate and identify the most severe and widespread pollution problems and directly link them to human health impacts. The report offers information needed to solve this global problem site-by-site, industry-by-industry.

The key to this report is that it calculates the impact of pollution in terms of years of life lost and years spent in poor health, whereas much of the current research in environmental health focuses only on deaths. Because toxic pollution often leads to crippling disability that does not always result in death, many victims are left uncounted by basic mortality statistics. The sum of life years lost and years lived with disability is called a Disability-Adjusted Life Year or DALY. The DALY offers a clearer picture of pollution’s toll. For example, the World Health Organization has estimated that globally, toxic chemical exposure was responsible for 4.9 million deaths and 86 million DALYs in 2004. This latter figure suggests that many millions of people live with disabilities caused by exposure to toxic chemicals.

Majority of Hotspots Result from Small, Local Operations: Another key finding of the report is that many of the worst pollution problems stem not from multi-national companies, but from poorly regulated small-scale operations like artisanal mining, backyard metal recycling, and outdated or abandoned factories.

The research from these evaluations will provide a much-needed resource to increase global awareness and comprehension of the severe health risks posed by toxic pollution. The refined Index model will also allow for a systematized way to assign priority to different sites and will allow international efforts to focus on the biggest global health problems caused by pollution.

Based in New York, Blacksmith works cooperatively in partnerships that include governments, the international community, NGOs and local agencies to design and implement innovative, low-cost solutions to save lives.

Since 1999, Blacksmith has completed over 50 cleanup projects in 21 countries. 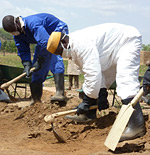