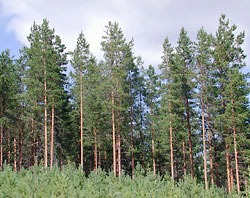 Research published recently in the journal Nature revealed how minute particles of essential oils released from forests of pine trees acts as a protection against climate change. The tiny particles of pine essential oil released by the leaves convert into aerosols above the forests, and these aerosols help to reflect sunlight back into space, which in turn aids the formation of cloud cover.

Trees have played a significant role in moderating the climate of our planet since they first began evolving around 400 million years ago (Devonian period), and toward the end of the Devonian the first forests developed as stemmed plants evolved into strong, woody structures capable of supporting raised branches and leaves.

By the beginning of the Carboniferous period around 360 million years ago, trees were prolific and had become a major part of the plant life community, mostly located in coal-producing swamps.

We have known for many years that trees absorb carbon dioxide and release oxygen, and are essential for combating the global warming effect being created by excess carbon dioxide generation. This new study conducted by a team of international researchers appears to show that trees do even more than we ever imagined to maintain life on earth.

Although this research investigates a quite complex subject, it is fascinating and has huge potential for limiting climate change and restoring the balance of Nature to the planet. I think you’ll find its well worth reading.

New research suggests a strong link between the powerful smell of pine trees and climate change. Scientists say they’ve found a mechanism by which these scented vapours turn into aerosols above boreal forests.

These particles promote cooling by reflecting sunlight back into space and helping clouds to form. The research, published in the journal Nature, fills in a major gap in our understanding, researchers say.

One of the biggest holes in scientific knowledge about climate change relates to the scale of the impact of atmospheric aerosols on temperatures.

These particles form clouds that block sunlight as well as reflecting rays back into space. They can be formed in a number of ways, including volcanic activity and by humans, through the burning of coal and oil.

The Scots Pine formed large parts of forests in Great Britain, particularly in the North of England and in Scotland, until 8000 years ago.

This species forms the basis of the native pinewoods of Scotland, and are extremely important for national and international wildlife conservation.

Now only remnants remain of the original forests since many were burnt for fuel, cleared for farming, or overgrazed by sheep and deer.

Today a long term project is underway working to protect and restore these ancient remnants of a once huge forest e.g. Glen Affric, N. Scotland.