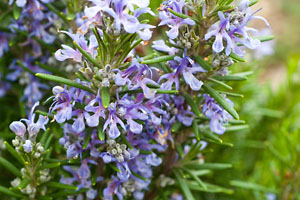 Throughout ancient history, the herb rosemary was used at weddings, funerals and burned in schools to enhance learning.

It’s fair to say the connection with rosemary and memory has been a long and persistent one throughout recorded history. In aromatherapy we have continued to maintain and support this association with rosemary essential oil, despite the usual ridicule and derision from doctors, researchers, and other suitably qualified experts over the years. We’ve learned to be quietly patient and wait for research to catch up with what history has been teaching us all along.

The findings of a study presented in 2013 at the British Psychological Society’s annual conference in Harrogate, United Kingdom, showed that inhaling rosemary essential oil (Rosmarinus officinalis ct. 1,8 cineol) extracted from the herb really does appear to enhance the ability to remember events and complex tasks.

In the study conducted at the University of Northumbria, the researchers tested 66 adults who entered one of two rooms; one room had no aroma and the other one had been diffused with rosemary essential oil. The participants then had their memory functions tested by attempting to find hidden objects, and by passing specified objects to researchers at particular times. All the tasks had to be performed without any prompting and participants also completed questionnaires assessing their mood.

The results showed that the subjects operating in the rosemary-scented room performed better on the memory tasks than those in the room with no aroma. The author of the study, Dr Mark Moss explained: ‘We wanted to build on our previous research that indicated rosemary aroma improved long-term memory and mental arithmetic.’

He continued, ‘In this study we focused on prospective memory, which involves the ability to remember events that will occur in the future and to remember to complete tasks at particular times this is critical for everyday functioning. For example when someone needs to remember to post a birthday card or to take medication at a particular time.’

The principal component of rosemary essential oil is the compound 1,8 cineol, and after analysing the participants’ blood significantly greater amounts of 1,8-cineole were present in the plasma of those in the rosemary scented room, suggesting that the influence of aroma was mediated pharmacologically. This supports other research that has shown that 1,8 cineol acts on the biochemical systems that underpin memory.

Co-author Jemma McCready said: ‘These findings may have implications for treating individuals with memory impairments. It supports our previous research indicating that the aroma of rosemary essential oil can enhance cognitive functioning in healthy adults, here extending to the ability to remember events and to complete tasks in the future.’

McCready added, ‘Remembering when and where to go and for what reasons underpins everything we do, and we all suffer minor failings that can be frustrating and sometimes dangerous. Further research is needed to investigate if this treatment is useful for older adults who have experienced memory decline.’

Since 1,8 cineol is the principal constituent in many other essential oils such as eucalyptus, it would be interesting to run this test again to compare the results with rosemary oil. It may well be that there are other constituents in rosemary essential oil that are responsible for the improvement of cognitive functioning, rather than just 1,8 cineol.

During outbreaks of the plague during the 13th and 14th centuries in Europe, rosemary’s anti-infectious properties were put to use in posies which were carried whilst travelling.

Along with juniper berry, in later years rosemary was burned in sick chambers and hospitals to protect against infection.

In France, it became known as ‘Incensier’.