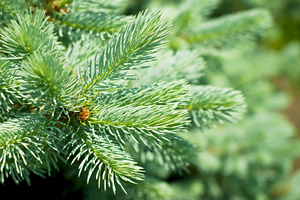 There are several fir essential oils extracted from the needles and twigs of trees belonging to the Pinaceae family, and most notably these fall within the Abies, Picea and Pinus genera.

Strictly speaking, only those of the Abies genus should be considered true ‘fir’ oils. As always, it is the use of common names that have introduced confusion within this taxonomic group.

For example, the Douglas fir which is commonly employed as a Christmas tree in the North-west United States is not actually a true fir but is classified in the Psuedotsuga genus.

Likewise, the Chinese fir is not a true fir but is classified in the Cunninghamia genus. Exercise caution when purchasing fir essential oil if the botanical name is not provided, since the oils from other species can be sensitising or irritant. True silver fir essential oil is derived only from Abies alba.

Abies alba is also known as the European Silver Fir, White Fir or White Spruce and is a lofty, symmetrical tree with a pyramidal form. It is considered the second largest tree in Europe after the Norway Spruce (Picea abies), and there have been many examples recorded in European countries where mature specimens have achieved the truly colossal height of 55 metres (179 ft).

Measuring up to 2 metres in diameter, the straight trunk is smooth and grey with resinous blisters, bearing horizontal boughs that curve upward at their outer extremities. The flat, needle-like leaves are dark green above with two white lines beneath, and when seen from below the tree appears to have a silvery colour – hence its common name. Silver fir essential oil is extracted from these leaves.

The winter buds are green, rounded and resinous, and at maturity the cones turn brown and stand upright. These cones are composed of thin, close scales, and each scale bears two winged seeds. An oil known as ‘Templin’ is produced from the cones, and the odour of this oil is colourfully described by the expert oil researcher Guenther, as ‘suave and balsamic’.

The silver fir is native to Europe, with extensive forests located on the southern Alps, and it is also plentiful in the Rhineland and on the Apennine and Pyrenees ranges. In fact the tree is abundant in most of the mountain ranges of southern and central Europe, but it is not usually found in the northern parts of that continent. In Russia this species occurs on the Caucasus and Ural mountains and in some parts of the Altai chain, and it is also prevalent throughout most of North and Central America.

Like many species of fir and pine, the entire tree is highly medicinal and provides a wealth of health giving remedies. The buds are antibiotic, antiseptic and balsamic, and the bark which can be harvested throughout the year is antiseptic and astringent. Leaves are expectorant, working also as a bronchial sedative, and the resin is antiseptic, balsamic, diuretic, eupeptic, expectorant, vasoconstrictor and vulnerary. What a powerhouse of health this tree is!

For centuries, the essential oil derived from the fragrant needles and twigs of silver fir has been used throughout the European continent for conditions such as fevers, arthritis, rheumatism, muscular pain and respiratory problems.

The tree also yields a high-quality turpentine known as ‘Strassburg Turpentine’ or ‘Therebenthine d’Alsace’ from blisters on its bark. Burgundy pitch and other resin products are also commercially obtained from the bark. The silver fir tree has a soft wood that is easily worked, and in many countries where it grows it is employed in carpentry.

Some harvesting takes place all year round, except in areas where heavy snow causes problems with transportation. Prior to distillation, the twigs are chopped into small pieces in order to pack the still as tightly as possible. Silver fir essential oil was still produced abundantly in many small village distilleries throughout Russia during the early 1900’s.

Steam distillation of the needles and twigs reportedly produces a yield of between 0.25% and 0.35% colourless, or pale yellow essential oil. The fragrance of the oil is sweet-green, slightly fruity and balsamic, and very reminiscent of the fresh needles. An absolute is also produced in France which is often referred to as Absolu d’Aiguilles.

Together with its close relative pine needle (Pinus sylvestris), silver fir essential oil does not appear to be very popular in the world of aromatherapy despite its many benefits. Nonetheless, it has powerful antiseptic properties that can be put to great use during the cold and flu season, – vaporising it helps to stop these conditions from spreading and clears a stuffy nose at the same time.

Its rubefacient and diuretic properties are ideal in combination with massage for such conditions as muscular aches and pains, arthritis, rheumatism, fluid retention and cellulite. Silver fir has a mild analgesic action that really seems to help ease stiff joints and muscles, whilst acting as a tonic to the whole system.

This tonic action also helps boost the emotions, bringing upliftment to downheartedness, negativity, sadness, stress and nervous exhaustion. When vaporising the oil, for me the fragrance is always reminiscent of a walk in a coniferous forest – uplifting, refreshing and highly rewarding.

Along with the Norway spruce, silver fir was one of the first to be adopted as a Christmas tree.

Recently, the Nordmann fir (Abies nordmanniana) which is native to Russia and Turkey has now replaced these species as the most popular choice due to better needle retention. 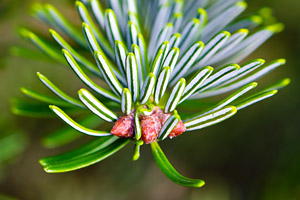 This attractive conifer stores its refreshing essential oil in the needles, which are really its leaves.

Apart from its use in aromatherapy, silver fir essential oil is incorporated in the fragrances of air-fresheners, disinfectants, detergents, soaps, bath toiletries and fougere perfumes.