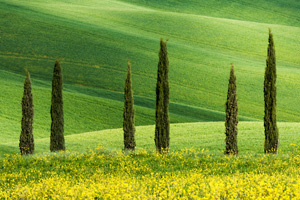 The type of cypress essential oil used in aromatherapy is obtained exclusively from the leaves of Cupressus sempervirens, although it is not uncommon to find inexperienced oil suppliers offering incorrectly labelled cypress oil derived from other cypress species.

This is because “cypress” is the common name given to several genera of evergreen, aromatic trees and shrubs belonging to the coniferous family of Cupressaceae, and many of them yield essential oil. However, only the species found within the genus Cupressus are considered to be true cypress by botanists.

This highlights the vital importance of having essential oil analysed and verified as authentic, with the botanical names printed on the labels of essential oils so that you can check to see it’s exactly what you want before you buy. Otherwise you will have absolutely no idea what type of “cypress” oil you are using on either yourself or your clients.

Cupressus sempervirens is a tall, columnar, pyramidical tree with slender branches covered with small shiny green leaves. This statuesque and stately tree reaches a height of between 12 to 20 metres (39-65 ft) and bears small flowers and cones.

The cones are between 2.5 and 4 centimetres (1-1½ inches) in diameter and generally occur in pairs, opening around September. After shedding the seeds, the cone persists on the tree for several years. The timber is hard, close-grained with a fine reddish hue and is very durable.

Also known as the Italian cypress, funeral cypress and Mediterranean cypress, Cupressus sempervirens is believed to originate from the eastern Mediterranean. It is now cultivated for the production of essential oil in Algeria, Croatia, France, Italy, Spain and Morocco.

Due to the woods resilience and durability cypress was used to make sarcophagi for Egyptian mummies and the Greeks used it to make statues of their gods. This led to the belief that cypress held powerful protective forces and symbolized life after death. For the ancient Greeks and Romans this symbolic longevity was carried on through the use of the word ‘sempervirens’ used in its botanical name, which means ‘ever-living’.

Use of ‘the Tree of Death’ spread to southern Europe for making coffins, as alluded to by Shakespeare in Twelfth Night, and for making funeral garlands or for strewing sprigs and branches on the funeral stands used to display or carry coffins.

Cypress leaves were used by the ancient Assyrians for treating haemorrhoids, and the Greek physician Galen (AD 165) wrote of its use for diarrhoea, internal bleeding and menstrual disorders.

Many years later, Culpepper came to the same conclusion as the Assyrians and wrote of the cones, ‘They are accounted very drying and binding, good to stop fluxes of all kinds, as sitting of blood, diarrhoea, dysentery, the immoderate flux of the menses.’ Chinese medicine considers the seed cones to be beneficial for the liver and respiratory system.

In France, cypress trees are pruned between mid October and April and the terminal branches and leaves are sold to the distilleries. Extraction of the essential oil is by steam distillation of the leaves and stems, producing a colourless to pale yellow essential oil.

The fragrance of cypress oil is fresh, green and coniferous aroma similar to pine and juniper, with a sweet and balsamic undertone. Cypress is used widely in the soap and perfumery industries, particularly in chypre type fragrances. It is also used to add a masculine note to men’s colognes and aftershaves.

Cypress is an effective vasoconstrictor, which means it helps to narrow dilated blood vessels such as varicose veins or broken capillaries that appear on the face. Blend it with lemon or bitter orange together with frankincense in a base cream or lotion for this type of application. It also helps to balance oily skin when used in this way.

Cypress essential oil has a diuretic and detoxifying action, therefore when blended and used in massage with other diuretic oils such as juniper berry, sweet fennel and grapefruit, it is valuable for oedema (fluid retention) and cellulite. Use it in massage to ease the pain associated with muscular cramps and spasms, periods, arthritis and rheumatism.

Asthma and spasmodic coughs respond well to cypress oil when vaporised, because it acts as a sedative to the respiratory nerve endings and is a decongestant. Likewise, it can help clear blocked sinuses and stuffy noses when you are suffering from a cold with the added bonus that it is an effective antibacterial.

On the emotional system, cypress oil is strengthening and fortifying which helps to facilitate changes in life and bring about transformation, especially to those who are rooted in the past. This makes it an excellent oil to use during the menopause as well as the monthly cycle, where it can be helpful with dysmenorrhoea. As you might expect from its historic associations, cypress is an essential oil that assists with the grieving process after bereavement, being both strengthening and relaxing to the mind.

The name for cypress is believed to come from the Greek character Cyparissus or Cuparissos, who could not find consolation after accidentally killing a favourite stag.

He prayed to Apollo for permission to grieve forever, and Apollo turned him into a cypress tree so that his place would always be where others grieve.

This is how the cypress tree became associated with cemeteries and known as an ancient symbol of comfort, solace and life after death. 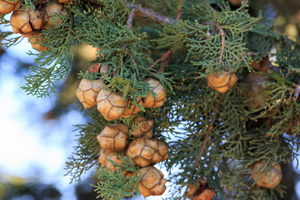 Cypress seed cones are green when young, maturing to brown about 20–24 months after pollination.

They are composed of 8 to 14 opposite scales and release pollen in late winter.

Discover more about how we test every essential oil for quality and purity, and how we choose the best;-

The need for purity