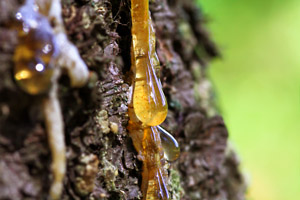 Elemi is a soft, fragrant oleoresin obtained from the trunk of Canarium luzonicum trees, and elemi essential oil is extracted from this oleoresin.

For over 100 years the name ‘elemi’ was used as a collective term for a number of oleoresins derived from several botanical species and geographical origins.

However today, ‘elemi’ generally relates only to oleoresin and extracted essential oil originating from the Philippines, which is known and traded internationally as Manila elemi.

The elemi tree is related to frankincense, myrrh and opoponax, which all belong to the Burseraceae family. In common with its close relatives, a white or yellow oleoresin is produced when the bark is lacerated. The fragrance of this oleoresin is sharp, green and pungent. Gums and oleoresins produced by a tree are technically referred to as a pathological exudate.

Canarium luzonicum is a tropical dioecious tree or shrub found in the primary forests of Luzon and other islands that make up the Philippines, where it is believed to have originated. It has a spreading habit, alternate pinnate leaves, and small pale yellow-white flowers. This species can easily reach a height of 30 metres (98 ft), and those that do attain this stature have a sturdy straight trunk measuring 1 to1.5 metres in diameter.

Elemi oleoresin is contained mostly in resin channels on the inside of the bark, and is produced mainly during the rainy season. It is acquired commercially by ‘tapping’ the trunk. Like other canarium trees it produces an almond shaped nut which is known locally as ‘pili’, and the tree is called ‘malapili’. Canarium luzonicum grows mainly in the Philippines, but it is also found in South and Central America, Australia, Brazil, India, the Malay Peninsula, and Moluccas.

Elemi was possibly one of the first aromatics used by the ancient Egyptians to embalm the dead, along with frankincense, myrrh, galbanum and Lebanese cedar. It is also documented that the Egyptians used it in their daily skincare preparations as well as in medicinal salves, poultices, unguents and incense. It was used throughout the Middle East for thousands of years as an antiseptic, and for healing scars and wounds.

At some time during the 16th century elemi was introduced into Europe and used extensively in folk medicine. It was employed in poultices for ulcerated wounds, ointments and soothing balms for skin infections, and is reputed to have been included in the celebrated healing ointments ‘Baume au Fioravanti’ and ‘Baume paralytique’. In the 17th century, a pioneering physician named J. J. Wecker used elemi in salves to treat soldiers who had been injured in battle.

Collection and distillation of elemi

The trees can be tapped throughout the year in Philippine rain forests, but in areas that have a dry season elemi is harvested mostly during the wet season when there is a greater flow of oleoresin. The tappers cut into the trunk to remove oblong strips of bark using a wooden mallet and a single edged machete known locally as a ‘bolo’. Subsequent strips of bark are removed every few days to stimulate the flow of exudate. The oleoresin is left to trickle down the bark where it becomes waxy, turning a pale yellow colour and resembling crystallized honey in consistency.

After collection, the oleoresin is cleaned to remove bark debris prior to steam distillation which yields 15% to 25% of essential oil, which is very high. The oil obtained is colourless or pale straw coloured, with a woody, balsamic fragrance, with spicy and fresh lemon-citrus nuances. Elemi resinoid is also produced by solvent extraction of the oleoresin. After harvesting, the oleoresin is steam distilled to release a colourless or pale straw coloured essential oil with a woody and balsamic fragrance, with citrus and spicy overtones.

Classed as a top note, elemi essential oil has a stimulating, energizing, strengthening, cleansing and clarifying action. In common with its distant cousin frankincense, its rejuvenating action helps to breathe life back into dull, lifeless and mature skin as well as reduce wrinkles. Concerns of over-harvesting frankincense in Somalia, Ethiopia and north Africa has caused it to added to the ‘threatened’ species list. As the price of frankincense continues to increase each year, elemi essential oil could be considered a cost-effective alternative for many types of aromatherapy treatments.

Aromatherapists are increasingly using elemi essential oil instead of frankincense in skin care treatments for enlivening a dull complexion, softening wrinkles, and soothing dry skin. Simply add a few drops of elemi essential oil to an unfragranced cream or lotion and apply it at night-time for an intensive revitalising and nourishing overnight treatment. Check out the easy recipe suggestions in the info-panel for using elemi oil to effectively revive tired, dull, dry skin.

It is also a highly effective antiseptic and antimicrobial essential oil that can be used effectively with a wide range of conditions including coughs, colds, wounds and fungal infections. When used as an inhalant, elemi essential oil can bring relief to respiratory conditions due to its valuable expectorant properties. It is particularly good for relieving catarrhal, dry and unproductive coughs.

On the emotional system elemi oil imparts a strengthening, balancing and centering action which makes it valuable in meditation. Use it to stimulate mental ability when you are suffering from stress, nervous exhaustion or simply feeling sluggish. Elemi essential oil can be used to help dispel loneliness and create a more positive outlook and encourage hopefulness.

Elemi excels as a skincare oil due to its rejuvenative properties.

You can add it to a carrier oil, lotion or cream - the carriers mentioned below are suggestions only.