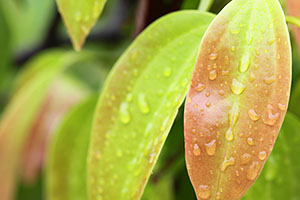 The former oil is the type used in aromatherapy, whereas oil from the bark contains a very high concentration of cinnamic aldehyde which is a powerful skin irritant.

Therefore this particular type of cinnamon oil should not be used in aromatherapy blends for use on the skin unless you know precisely how to calculate the total levels of cinnamic aldehyde in your blend.

Known botanically as Cinnamomum verum or C. zeylanicum, cinnamon originates from the island of Sri Lanka and the neighbouring Malabar Coast of India. It is also found in Madagascar, Comoros Islands, the Tenasserim Hills of Burma, South America and the West Indies. Several attempts have been made to transplant cinnamon trees to other parts of the tropical world, but they have become naturalized only in the Seychelles.

The cinnamon tree belongs to the Lauraceae family and is a bushy, tropical evergreen that ranges in height from 5 metres (16ft) to 15 metres (45 ft) depending on origin. The bark is rough, scaly, and highly aromatic. When stripped off and dried, this fragrant bark forms the familiar cylindrical quills that are powdered to produce what is possibly the world’s oldest and best-known spice.

The strong branches terminate in long (6-18cm), ovate or elliptic leaves that are bright green on the upper side and paler underneath, turning leathery when mature. When rubbed, the leaves emit a spicy odour and have a hot, pungent taste. The leaves are the source of the essential oil we are discussing. Young shoots are a speckled, greenish-orange colour, and from April to May in Sri Lanka small, creamy-white flowers blossom in groups.

As early as 1500 B.C. the Arabs were controlling the distribution of both types of ‘cinnamon’ to Babylon, Egypt and Rome, and were able to monopolise this lucrative trade by keeping their sources a closely guarded secret. About 1,800 years later the Romans began making expeditions across the Indian Ocean to source cinnamon and other precious commodities directly themselves, thereby revealing the secret of its origin.

In Egypt, cinnamon was used for embalming purposes, medicine and incense, whilst in medieval Europe, it was highly prized as a flavouring as well as an aromatic in religious rites. Cinnamon has an expansive range of medicinal applications that have been embraced by many cultures throughout history, including the treatment of arthritis, diarrhoea, infections, menstrual disorders, nausea, rheumatism and sore throats.

Apart from during the rainy season, the leaves are collected throughout the year thanks to a sustainable system of management known as coppicing. After harvesting, the leaves are removed from the branches and left to dry for a few days prior to distillation, since fresh leaves require much longer processing times.

Traditional stills in Sri Lanka are large wooden vessels capable of holding up to 200 kg of leaves, on top of which is fitted a copper still head and steam is introduced from a separate wood-fired boiler. In some cases, all-metal vessels are used and water-steam distillation is employed. Cinnamon leaf essential oil is a yellow to pale brown colour and has a warm, sweet and spicy aroma that is somewhere between a base and middle note for blending.

Cinnamon leaf essential oil is a powerful antiseptic, and can be used effectively to ease coughs and colds and from spreading. Put a few drops in your aromatherapy diffuser or burner to help kill airborne bacteria and also relieve the symptoms of a cold. Blend it with eucalyptus, niaouli, ravensara or tea tree essential oil for an effective bug-busting blend.

It has a warming and antispasmodic effect on the body, so in massage oils, it is excellent for easing muscular aches and pains, arthritis and rheumatism. For a powerful synergistic blend that is excellent for relieving muscular aches and sprains as well as joint pain, mix cinnamon leaf oil with Roman chamomile, sweet marjoram, or rosemary. Since cinnamon leaf essential oil can be an irritant, use it at no more than a 1% concentration on the skin.

Cinnamon oil also acts as a tonic to the mind and body, reducing drowsiness and bringing a welcome boost to flagging energy levels if you are suffering from exhaustion or burn-out. For an instant ‘pick-me-up’ blend it with ginger and lemon essential oil. Its stimulating action also makes it an effective essential oil for boosting or maintaining the immune system.

Cassia is often referred to as Chinese Cinnamon, but this oil is derived from the species Cinnamomum cassia and is a dermal irritant and sensitiser that should not be used on the skin.

This clearly highlights the importance of identifying an oil by the botanical name, rather than by the common, or origin name.

However, it is a mild dermal and mucous membrane irritant, therefore you should keep it away from the mouth, nose and eyes, and use it in a relatively low concentration.

When using it for massage with 2 other essential oils in equal proportions it will be fine, since a 2% blend of 3 essential oils is only a 0.666% concentration of each oil.

If you are not using it with any other essential oils do not exceed 3 drops of cinnamon leaf oil to 10ml of carrier oil.

At the National Taiwan University, researchers have discovered that cinnamon leaf essential oil from the species Cinnamomum osmophloeum is an effective, environmentally friendly pesticide with the ability to kill mosquito larvae.

Recently, there has been research into the properties of cinnamon at Kansas State University, where microbiologists have been testing the effectiveness of cinnamon in eliminating E. coli 0157:H7, which is one of the most virulent bacterial causes of food poisoning.