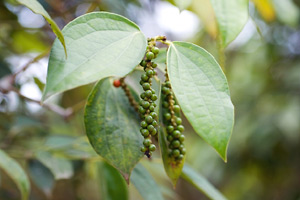 Obtained from the dried peppercorns of the vine known as Piper nigrum, stimulating black pepper essential oil can be found in the toolkit of almost every aromatherapist due to its highly beneficial properties.

And like many other spices that were considered an effective medicine thousands of years ago, black pepper has continued to be used in the folk medicine of many cultures ever since.

Early records show that black pepper was often confused with its close relative long pepper (Piper longum) for both its culinary and medicinal uses. Nonetheless, for thousands of years both types of pepper were employed not only as a spice, but also as a medicine in many healing traditions around the world such as Indian Ayurvedic and Traditional Chinese medicine for colds, constipation, dysentery, fever, indigestion, pain, piles, and as an anti-malarial treatment.

Piper nigrum is a tropical woody vine reaching a height of around 10 metres when clinging to trees for support and shade whilst growing wild. Grown under small-scale cultivation the vines are often trained up live forest trees, whereas large-scale plantations use concrete or wooden posts up to 5 metres tall to support the vines.

The simple dark-green almond shaped leaves have prominent veins, and small yellow-green to pale yellow flowers grow in clusters of about 50 along flowering stalks known as spikes. The flowers are followed by round, berry-like fruits measuring 0.5-1.0cm in diameter and resembling tiny green grapes growing in clusters of 50-60 on each spike, turning red as they ripen. Black pepper is the dried unripe fruit, and white pepper is produced from the ripe fruits that have had the outer hulls removed before drying.

Piper nigrum originated in the monsoon forests of the Malabar coast in southwest India, and is now grown commercially mainly in China, Brazil, Indonesia, Madagascar, Malaysia and Vietnam. Essential oil extraction is often conducted abroad after being exported rather than done locally.

The spice pepper was first recorded around 3,000 years ago in ancient Indian Sanskrit texts, although it was actually long pepper that was most popular then and India’s most valuable export. Due to its high value the true source of both long and black pepper was jealously guarded.

Both types of pepper were transported by the ancient Phoenicians and nomadic Arabs to markets in Babylon, Carthage, Egypt, Nineveh and Rome. Long pepper arrived in Greece around the sixth century BC, and within a few hundred years later Hippocrates enthusiastically wrote of its virtues as a medicament rather than a spice.

As the Roman Empire expanded, the demand for pepper grew as it quickly became a symbol of power and affluence. It was often used to gain political leverage, and was eventually used as currency since by this time it was worth its weight in gold. Pepper was counted in single peppercorns and rent, dowries and taxes were often paid in peppercorns for hundreds of years.

During the early Middle Ages the cities of Alexandria, Genoa, Florence and Venice owed their huge economic success to black pepper, and it had become so vital to national economies that many wars were fought and kingdoms overthrown during attempts to discover or control its supply. The Dutch, English, French and Portuguese all fought to monopolize what was now the world’s most popular spice from the Far East.

Harvesting is determined by the climate and whether the berries are intended for black or white pepper, since white pepper is obtained only from the red, ripe fruit. Berries are collected whilst still green for black pepper, and because the oil content of the berries decreases as they reach maturity timing is critical.

In Sri Lanka and Indonesia it is common to blanch the berries in hot water for a few minutes before drying to speed up the browning process, since this process activates the phenolase enzyme responsible for producing the black colour during sun-drying. The dried berries are then crushed and subjected to steam distillation, which produces a pale green to colourless essential oil with a fresh, dry-woody, warm and spicy aroma, reminiscent of the dried spice.

When used in massage, black pepper essential oil has a stimulating and warming action that relieves stiff or painful joints and muscles by dilating blood vessels, thereby bringing increased circulation to the affected area. It produces a deep, penetrating warmth with a mildly analgesic effect that brings relief to arthritic and rheumatic conditions.

It is the perfect oil for warming up muscles prior to exercise and it helps to improve muscle tone. Due its warming action, black pepper oil can be effective wherever there is any form of coldness, either physical or emotional.

When massaged on the abdomen, black pepper essential oil is one of the finest remedies for treating digestive disorders due to its effective antispasmodic and carminative properties, plus it aids digestion and helps improve a poor appetite. It is also used to treat anaemia since it helps produce new blood cells by stimulating the spleen, and it can also be put to good use with coughs and colds. Black pepper is a valuable oil during the cold winter months.

Research conducted in 1994 at the University Medical Centre in Durham, North Carolina, reported that inhaling black pepper oil significantly reduced the craving for cigarettes, and test subjects experienced relief from the somatic symptoms of anxiety.

Since the chemistry of this oil is highly variable it may be wise to not exceed a concentration of 2%, and always avoid damaged skin and mucous membranes to avoid any possible irritation.