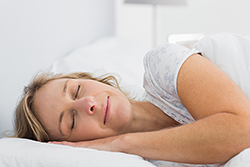 The findings of a study in Iran showed a significant difference between the mean scores of sleep quality in the two groups after an aromatherapy treatment with lavender essential oil (Lavandula angustifolia). Aromatherapy treatments with lavender oil in the experiment group led to decrease of sleep disorders and resulted in improving the quality of sleep in ischemic heart disease (IHD) patients hospitalized in critcal care units (CCU).

In agreement with these findings, the study of Goel et al, in 2006 on the quality of sleep in young men and women and comparing the effect of lavender essential oil on it, found a significant difference between the scores of sleep quality before and after aromatherapy in the experiment group. A pilot study by Lewith et al, also evaluated the effects of aromatherapy with lavender in treating average sleeplessness in healthy people by using PSQI and HCAMQ, and found that after aromatherapy with lavender oil in comparison with the controls who received sweet almond oil as placebo, the sleeplessness was reduced and their quality of life was significantly increased.

Background of the study

Coronary artery disease is one of the most dangerous diseases and a major cause of mortality and disability in developed countries. This disease is responsible for 38 percent of the deaths that is one out of each 6.2 deaths. The statistics published by the American Heart Association in 2008 indicate that in 2004 about 15,800,000 inhabitants of the United States suffered from this disease and more than 452,300 of these patients lost their lives.

According to statistics obtained in 2005, about 2500 Americans were hospitalized in a critical care unit (CCU) due to coronary heart disease. In Iran also, the incidence of cardiovascular disease is high and according to the reports of the Health Ministry, 46% of deaths in Iran are due to blood circulation diseases. And the prevalence of coronary artery disease in Isfahan has been reported 4.19%.

Sleep disorders are relatively common among patients admitted to CCU and these patients experience sleep disorder in the stage of rapid eye movements, changes in sleep levels, frequent wake-ups and disturbance in sleep biological systems throughout the night. Lack of sleep and rest can be a factor stimulating cardiovascular attack. Lack of sleep increases blood pressure and heart beat. The increase in activities of sympathetic system, due to lack of sleep, causes cardiovascular attack. Sleep disorder can cause pain experience and there is a direct relationship between quality of sleep and pain.

For patients hospitalized in CCU, sleep is difficult especially because of their medications, monitoring and the unit noises, while patients in these units need more sleep.7 Nowadays, the best method to improve the quality of sleep in patients, is not just medications. Although these methods improve the quality of sleep in patients, their complications are too much. Therefore, the methods in complementary medicine should be used by nurses to help these patients sleep better.

One of the treatments that has been increasingly used in recent years, compared to other complementary medicines, is aromatherapy. This treatment has the second rank among the methods most used in clinical practice by nurses. It uses essential oils extracted from fragrant plants to treat diseases. One of these essential oils which has a huge use in aromatherapy is lavander essential oil.

Nowadays the approach of modern medicine to traditional medicine is obvious, so that WHO called 2005 as the year of alternative and complementary medicine. On the other hand, there are some doubts about the effectiveness of complementary medicine and there is a gap between research and application of these methods in medical systems, which has prevented these methods to enter the nursing performance.

The main aim of this study was to determine the effectiveness of aromatherapy on quality of life of patients with IHD hospitalized in CCU of the hospitals of the Isfahan University of Medical Sciences in 2009. The special objectives included determination and comparison of the mean scores of quality of sleep in the two groups of experiment and control before and after the aromatherapy.

This study was a clinical trial, in which data of the two groups were collected pre and post intervention and the study was single-blind. The sample included all male and female patients with IHD, suffering from unstable angina and myocardial infarction, hospitalized in CCU of Al-Zahra and Shahid Chamran hospitals of the Isfahan University of Medical Sciences. Sampling began on 27 October 2009 and continued for two months and 64 patients were selected randomly with simple method and were divided into two groups of control and experiment. Entry criteria included maximum age of 65 years, diagnosed for IHD by a specialist, passed the first stage of the disease (the first 24-48 hours of the disease), no risk of heart failure (class III and IV) and cardiogenic shock, no use of complementary alternative medicine methods (herbal medicines and other methods) in the past one week, no use of sleeping drugs, benzodiazepines, and sedative drugs, no addiction, no history of asthma, eczema and allergies to flowers and plants and no smell disorders. Patients who were not willing to participate, or were prescribed with sleeping drugs during the study (except ten mg oxazepam or equivalent of that per day), or showed symptoms of allergy to lavender were excluded from the study.

To collect data, a two section questionnaire and the patients’ file were used. The first section of the questionnaire included demographic data including age, sex, education, marital status, job, history of heart disease and hospitalization. Section two, first asked about the habits before sleep and then, standard questionnaire of SMHSQ including 11 questions about quality of sleep was measured based on the scale of 1 for never, 2 for very little, 3 for to some extent, and 4 for a lot. The lowest score of sleep disorder was 11, which was interpreted as lack of sleep disorder and the highest score was 44, showing the highest amount of sleep disorder. Scores 11 to 21 showed mild sleep disorder, 22 to 32 average sleep disorder, and 33 to 44 severe sleep disorder. The SMHSQ has validity and reliability around the world and has been evaluated in many studies. For example, Abolhasani in his study used this questionnaire and found 91% reliability using Cronbach’s alpha and approved the reliability of the questionnaire. To collect data, the researcher went to the CCU at the beginning of night shift at 8 pm and interviewed with patients who had entry criteria. After getting their consents and informing them about the process of the study, the sample was selected by simple method.

The researcher prepared the patients and their surrounding environment for the aromatherapy before starting the intervention. Before applying aromatherapy on the patients’ bed, SMHSQ was completed. Then, the process of intervention was explained for the patients in the experiment group and two drops of lavender oil made by Barij Essence Company were dropped on a piece of cotton placed in a small box near patients’ pillow, within 20 cm distance from the patient. The patients were asked to breathe normally and smell the lavender essence. Aromatherapy was performed for three continuing nights from 9 pm to 6 am for the experiment group. At the end of intervention, the third day after patients’ night sleep, the questionnaire of sleep quality was completed by asking the patients.

Considering that the main aim of this study was to find the effectiveness of aromatherapy on quality of sleep of IHD patients hospitalized in the CCU, a control group was required. After simple sampling and dividing patients into two groups of experiment and control, the control group was left without any intervention and just received the routine care provided by CCU nurses for all patients including a quiet environment with the least light and noise. The questionnaire of sleep quality was completed by asking the control group patients before and after the routine services.
It should be mentioned that regarding the single-blind feature of the study, the questionnaires were completed by a research assistant who was not aware of the patients’ assigned group. In this study, the independent variable was aromatherapy and the dependent variable was quality of sleep. Also, background variables including age, sex, education, marital status, job, history of heart disease, history of hospitalization, and before sleep habits of patients were collected and analyzed.

Research data, in general, was quantitative (discrete, continuous) and qualitative (nominal, ranks) and to analyze them, SPSS and descriptive and inferential statistics were used. For the statistical analysis, independent t-test was used for dependent variables in the two groups and to compare the mean scores of sleep quality within groups paired t-test was used. Also, to evaluate the homology of background variables, chi square and Mann Whitney U tests were used.

Regarding the special goals of the study, the independent t-test showed no significant difference in the mean scores of sleep quality between the two groups before the intervention which was 20.12 ± 5.76 in the experiment group and 18.31 ± 4.44 in the control group (p = 0.16). But, the paired t-test showed that the mean score of sleep quality (sleep disorder) in the experiment group before the intervention with lavender oil was significantly different than that after the intervention (13.97 ± 2.58, p < 0.001).

The mean score of sleep quality before the routine cares in the controls was not significantly different than that after the routine cares (18.68 ± 3.52, p = 0.27). The mean score of sleep quality in the experiment group after aromatherapy with lavender oil was significantly different than that in the controls (p < 0.001).

Sleep disorder is one of the common problems patients face in intensive care and critical care units, and it is usually treated by sleeping pills.

Complementary medicine is favoured because of its efficacy and safety, and aromatherapy is an holistic nursing approach that treats human beings as a biological, mental and social unit, while the psychological dimension has the central role.

Each of these dimensions is dependent on each other and is affected by each other.

Therefore, it is fundamental for nurses to provide aromatherapy as part of their clinical performance.

This was a clinical trial on 64 patients (male and female) hospitalized in CCU in Al-zahra and Chamran hospitals.

The intervention included 3 nights, each time 9 hours aromatherapy with lavender oil for the experiment group, while the controls received no intervention.

Both groups filled out a questionnaire that included 11 items to assess sleep quality before and after intervention.

Data analysis showed that the mean scores of sleep quality in the two groups of experiment and control were significantly different after the aromatherapy with lavender oil (p < 0.001).