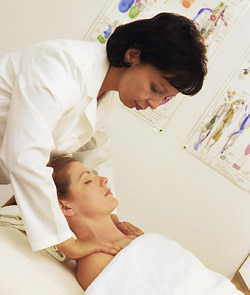 Massage may be serious medicine, at least when it comes to treating persistent low back pain, a recent study shows. Low back pain is one of the top reasons people seek medical attention in the U.S., and it is notoriously tough to treat. Studies show very few medical therapies, from medications to injections to surgeries, reliably relieve it, and some can aggravate the problem.

The new study randomly assigned 400 adults with moderate-to-severe low back pain lasting for at least three months to either weekly whole-body massages for relaxation, weekly massages that focused on specific muscle problems around the lower back and hips, or usual care.

People assigned to the usual care group were tracked by researchers, but they dealt with their back problems on their own. The approach could include, for instance, taking pain medications or muscle relaxants, seeing doctors or chiropractors, physical therapy, or simply not doing anything.

After 10 weeks, participants in both massage groups reported greater average improvements in pain and functioning compared to those in the usual care group. And the type of massage they received didn’t seem to matter. That’s good news, researchers say, because relaxation, or Swedish-style, massage is the kind most commonly taught in massage schools and is thus widely available.

For most, the improvements seen with massage were modest. Daily functioning, for example, improved, on average, between 2 to 4 points on a 23-point scale. Average pain improved about 2 points on a 10-point scale. Experts say that’s a bit better than the degree of benefit that most people see from taking over-the-counter nonsteroidal anti-inflammatory drugs (NSAIDs), like ibuprofen, for low back pain.

But for a substantial minority, however, the improvements were much greater. At the end of the 10-week intervention, 36% and 39% of patients in the massage groups said their pain was nearly or completely gone, compared to 4% in the usual care group.

“It’s not really harmful, and it does help a significant chunk of people who have not benefited from other treatments,” says study researcher Daniel C. Cherkin, PhD, associate director and senior scientific investigator with the Center for Health Studies at Group Health Cooperative in Seattle.

The study was funded by the National Center for Complementary and Alternative Medicine. It’s published in the Annals of Internal Medicine.

“I think this trial is good news in the sense that it suggests that massage is a useful option that helps some substantial fraction of these patients,” says study researcher Richard A. Deyo, MD, a professor in the department of family medicine at Oregon Health and Science University in Portland. “Like in most other treatments, this is not a slam dunk, and it’s not like a cure,” Deyo tells WebMD, “But it’s something that seems to offer a significant benefit for a substantial number of patients.”

Experts who were not involved in the study agree. Roger Chou, MD, an associate professor of medicine at Oregon Health and Science University, helped to write the 2009 American Pain Society guidelines for treating low back pain. He says massage was recommended in those clinical practice guidelines, though the authors noted that the recommendation was based on a small number of studies and the benefits were likely to be modest.

“I think the study is quite consistent with what we have in our guideline, and it adds to the evidence that’s out there,” Chou says. “It strengthens the case to consider massage as one of the potential treatment options for chronic low back pain.” But Chou, and others, including the study’s researchers, say exercise is likely to offer far greater benefits than massage for people who’ve been struggling with back pain for a long time, and they stress that people shouldn’t assume that massage alone will banish low back pain for good.

“Certainly, it’s not going to hurt,” says Fredrick P. Wilson, DO, director of the Cleveland Clinic Solon Center for Spine Health, in Ohio. “But it’s a short-term improvement, and it’s certainly not a fix,” says Wilson, who reviewed the study for WebMD but was not involved in the research.

Wilson says he would have liked to have seen more objective measures of function included in the study, like spinal range of motion assessed by investigators, rather than just relying on self-reports from study participants.

But he says that on the whole, there’s little harm to be had with massage, and some evidence of help. So it might be worth a try, but he says it should be coupled with exercise. “When we see patients, we push them toward active exercise rather than passive natural therapy kind of a thing. If they can have stronger core strength to support their spine, they’re going to be better off in the long run. So we’re trying to fix, rather than ease, their pain,” Wilson says.

Studies estimate that as many as 80% of adults will experience an episode of low back pain in their lifetimes. In most cases, the pain will go away without any treatment in two to four weeks. About 14% of the time, however, low back pain lingers, sometimes without a readily identified cause. Relatively few medical interventions have been proven to reliably help back pain, and it is considered to be one of the most overtreated ailments in American medicine.

“Over the last 15 years or so, there’s been a steady increase in the use surgery, prescribing of opioids, in the use of injections in the use of spine imaging,” Deyo says, “and overall, population-wide, it doesn’t seem to have helped very much in reducing the impact of back problems. That’s why it’s especially promising to find benefit in a noninvasive therapy like massage”, he says.

The study found that the 10 treatments received by study participants would have cost about $540 in the community. Massage isn’t typically covered by insurance. The benefits appeared to persist for four months after the course of treatment was completed. “I think it’s true that wherever we can find alternatives that seem to be helpful, it’s likely to be a useful thing for clinicians,” Deyo says.

Studying Massage for Low Back Pain

Researchers recruited adults, mostly women, ages 20 to 65 who had visited the doctor at least once for their low back pain. People were not included in the study if their back pain could be attributed to a specific cause like fractures, cancer or spinal stenosis, if they’d had surgery for their back problems in the last three years, or if they had an underlying medical condition like fibromyalgia or rheumatoid arthritis that would complicate pain treatment.

Study participants were randomly assigned to receive either Swedish massages for relaxation or a more targeted kind of “structural” massage that focused on specific muscle and connective tissue problems that might affect the low back.

“The treatment will go into the gluteal muscles and up in to the neck, but it’s not a fully body massage and it tends to be focused with the goal of treating the effected tissues,” says Cherkin. “A full-body relaxation massage is more or less full-body and it doesn’t focus on the back. It’s intended to maximize relaxation.”

A third group was told they were participating in a trial of massage therapy, but they were assigned to usual care. Massage therapists all had at least five years of experience, and some had additional, specialized training to provide the focused, structural massage technique.

Before and after the 10 weekly massages, participants completed questionnaires that assessed pain and physical functioning. They were asked, for example, how easy or hard it was for them to get up from a chair or to tie their shoes.

The massage groups improved in other important ways, too. After 10 weeks, they were less likely to report using medication for their low back pain than those in the usual care group. They also reported fewer days in bed and fewer days of lost work or school than those who got usual care. After six months, many of the improvements experienced by the massage group had persisted, but they were negligible after one year, the study shows.

The study had limitations, the researchers say, particularly that people who got usual care knew they were missing out on massages received by other participants. That might have led them to exaggerate the symptoms they reported to researchers, making massage seem more effective than it really was.

And they said because low back pain often returns after the first episode, it would probably be wise for people who use massage in conjunction with exercise. But often, Deyo points out, low back pain hurts so much that it’s hard to move, and being inactive, studies show, can make back pain worse. Massage, he thinks, may help to break the pain-inactivity cycle.

“In some ways, this may be a way of helping patients to improve, giving them confidence that they can get some control over the problem and maybe help to ease the transition into a more active type of therapy,” Deyo says. “I don’t see massage as the final solution,” he says, “I see it as maybe a helpful step toward getting people more active.”

Choosing The Right Form Of Meditation 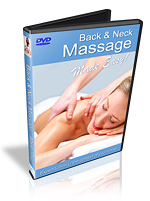 If you have ever wanted to know how to perform a great back massage, then this fantastic DVD is just for you.

The program is divided into easy to follow chapters that lead you through the entire process of giving a therapeutic, effective massage.

You will be shown the tools you will need, how to create the right atmosphere for a massage, when not to massage somebody, the correct movements and strokes, and how to end your session properly.