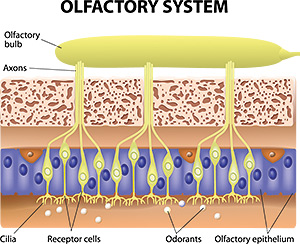 A controversial theory that the way we smell involves a quantum physics effect has received a boost, following experiments with human subjects. It challenges the notion that our sense of smell depends only on the shapes of molecules we sniff in the air.

Instead, it suggests that the molecules’ vibrations are responsible. A way to test it is with two molecules of the same shape, but with different vibrations. A report in PLOS ONE shows that humans can distinguish the two. Tantalisingly, the idea hints at quantum effects occurring in biological systems – an idea that is itself driving a new field of science, as the BBC feature article Are birds hijacking quantum physics? points out.

But the theory – first put forward by Luca Turin, now of the Fleming Biomedical Research Sciences Centre in Greece – remains contested and divisive. The idea that molecules’ shapes are the only link to their smell is well entrenched, but Dr Turin said there were holes in the idea.

He gave the example of molecules that include sulphur and hydrogen atoms bonded together – they may take a wide range of shapes, but all of them smell of rotten eggs. “If you look from the [traditional] standpoint… it’s really hard to explain,” Dr Turin told BBC News. “If you look from the standpoint of an alternative theory – that what determines the smell of a molecule is the vibrations – the sulphur-hydrogen mystery becomes absolutely clear.”

Molecules can be viewed as a collection of atoms on springs, so the atoms can move relative to one another. Energy of just the right frequency – a quantum – can cause the “springs” to vibrate, and in a 1996 paper in Chemical Senses Dr Turin said it was these vibrations that explained smell.

The mechanism, he added, was “inelastic electron tunnelling”: in the presence of a specific “smelly” molecule, an electron within a smell receptor in your nose can “jump” – or tunnel – across it and dump a quantum of energy into one of the molecule’s bonds – setting the “spring” vibrating. But the established smell science community has from the start argued that there is little proof of this.

Of horses and unicorns

One way to test the idea was to prepare two molecules of identical shape but with different vibrations – done by replacing a molecule’s hydrogen atoms with their heavier cousins called deuterium.

Leslie Vosshall of The Rockefeller University set out in 2004 to disprove Dr Turin’s idea with a molecule called acetophenone and its “deuterated” twin. The work in Nature Neuroscience suggested that human participants could not distinguish between the two, and thus that vibrations played no role in what we smell. But in 2011, Dr Turin and colleagues published a paper in Proceedings of the National Academy of Sciences showing that fruit flies can distinguish between the heavier and lighter versions of the same molecule.

A repeat of the test with humans in the new paper finds that, as in Prof Vosshall’s work, the subjects could not tell the two apart. But the team then developed a brand new, far larger pair of molecules – cyclopentadecanone – with more hydrogen or deuterium bonds to amplify the purported effect. In double-blind tests, in which neither the experimenter nor the participant knew which sample was which, subjects were able to distinguish between the two versions.

Still, Prof Vosshall believes the vibrational theory to be no more than fanciful. “I like to think of the vibration theory of olfaction and its proponents as unicorns. The rest of us studying olfaction are horses,” she told BBC News.

“The problem is that proving that a unicorn exists or does not exist is impossible. This debate on the vibration theory or the existence of unicorns will never end, but the very important underlying question of why things smell the way they do will continue to be answered by the horses among us.”

Tim Jacob, a smell researcher at the University of Cardiff, said the work was “supportive but not conclusive”. “But the fact is that nobody has been able to unequivocally contradict [Dr Turin],” he told BBC News. “There are many, many problems with the shape theory of smell – many things it doesn’t explain that the vibrational theory does.”

And although many more scientists are taking the vibrational theory seriously than back in 1996, it remains an extraordinarily polarised debate. “He’s had some peripheral support, but… people don’t want to line up behind Luca,” Prof Jacob said. “It’s scientific suicide.”

Columbia University’s Richard Axel, whose work on mapping the genes and receptors of our sense of smell garnered the 2004 Nobel prize for physiology, said the kinds of experiments revealed this week would not resolve the debate – only a microscopic look at the receptors in the nose would finally show what is at work.

“Until somebody really sits down and seriously addresses the mechanism and not inferences from the mechanism… it doesn’t seem a useful endeavour to use behavioural responses as an argument,” he told BBC News. “Don’t get me wrong, I’m not writing off this theory, but I need data and it hasn’t been presented.”