Home » Healthy Living » What We’ve Learned While Working From Home

What We’ve Learned While Working From Home 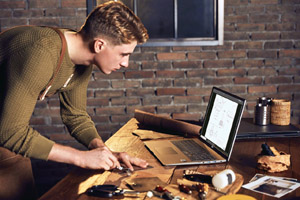 The recent transition to widespread working from home has shown that the experience has been both educational and eye-opening for many.

Working at home means learning to cope with distractions, space constraints, managing time with family and learning new skills. And, according to new consumer research, it has also meant reassessing what is most important.

A nationwide survey conducted by Wakefield Research on behalf of LG Electronics reveals the many ways working from home has challenged and surprised Americans.*

Connecting with loved ones

The most striking survey results show the importance of close relationships. Social distancing has caused many to reassess who is most important to them, and how much they may have taken friends and family for granted.

The global health crisis has turned socializing into a more deliberate act. More than half (53%) of homebound people said they felt closer to loved ones than before the outbreak, and 27% even said that they felt much more connected than before.

When asked what they want to do first when the crisis is over, the top answer was to visit loved ones, followed by going out to a meal.

For many people, juggling priorities and obligations was difficult even before the switch to remote working. But having to work at home has shined a brighter spotlight on how we cope and find a healthy work-life balance.

Here are some of the tricks people have discovered:

Most people affected by the crisis say they have had to master (or learn from scratch) how to complete their work entirely from home, including the new norm of conducting video conferences from somewhere in their home.

Technology has been crucial to this adaptation. Almost half (47%) have discovered a new app or service they say they now can’t live without — especially video chat apps that have helped them learn how to communicate better with colleagues and loved ones.

As one might expect, a majority of respondents admitted to making conference calls from a common area in their house. However, some said they were stuck calling from a makeshift workspace in a lesser-used part of home. One-fifth of respondents admitted to calling from a basement or attic, while others said they took work on the go. The research shows 18% have called from their cars, and perhaps most surprisingly, 12% admit taking work calls in the bathroom.

For many, the time they’ve spent working at home has helped them appreciate how successfully technology has kept them connected on all fronts, including their work and personal lives.

Overall, the experience of working from home has had everyone reassessing what — and who — is most important to them. Among those who said they’ve discovered new apps, digital services or technology, many said that they were spending significant time using it for family or relationship management.

An overwhelming number of survey respondents said that they plan to continue at least one of their new practices even after returning to a “normal” work situation, including:

As a result of spending some more time at home, many have been rethinking their priorities, with nearly half considering buying or using fewer things. Some (16%) have thought about beginning a new career, and others are considering starting their own business (14%).

No matter what your work-from-home experience has been, chances are it’s changed your attitudes about work and family life — and how to balance the two — in ways that will stay with you long into the future.

*The LG WFH Survey was conducted by Wakefield Research among 1,000 U.S. adults, working from home due to COVID-19, between April 10 and April 15, 2020, using an email invitation and an online survey.

How To Take Charge Of Your Mental Health During Lockdown Living

4 Ways To Connect With Family & Friends While Practicing Social Distancing

Men’s Health Month in June: A time to take action

Black pepper essential oil produces a deep, penetrating warmth that is highly valued in aromatherapy. learn about its history, properties, and many uses in aromatherapy . . .

END_OF_DOCUMENT_TOKEN_TO_BE_REPLACED

Clary sage essential oil is obtained from the flowers and leaves of the herb Salvia sclarea. Discover its therapeutic properties, history, and how to use it in aromatherapy . . .

END_OF_DOCUMENT_TOKEN_TO_BE_REPLACED

Pine essential oil is obtained from the needles and cones of several species of coniferous trees belonging to the genus Pinus. Discover its history and many uses in aromatherapy . . .

How To Avoid Sun Damaged Skin

Enjoying the sunshine is one of the best things about summer, but before you step outside you really need to know how to protect yourself effectively from the dangers of sun damaged skin . . .

END_OF_DOCUMENT_TOKEN_TO_BE_REPLACED

It’s never too late to start caring for your skin, and following a few simple tips can help you get the very best results possible – naturally . . .

END_OF_DOCUMENT_TOKEN_TO_BE_REPLACED

Cleansing your skin with an aromatherapy carrier oil is a great idea for those of you looking for a more natural way to cleanse. They help to moisturise, tone, and effectively dissolve dirt and impurities . . .