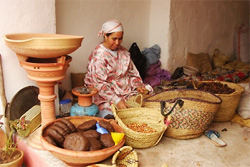 “My life has really changed. It used to be that I could never leave the house. Today, I am earning an income and can send my children to school.”

These are the words of a woman who has been given a new lease on life, thanks to a cooperative run exclusively by women in Tamanar, in the Essaouira region of Morocco.

Here, a group of 50 women has integrated itself into the economy by capitalizing on a piece of ancestral knowhow.

The key is the argan or Moroccan ironwood, a long-lived tree that grows nowhere but in Morocco. Today it is threatened: in less than a century, more than a third of the argan forest has disappeared. Yet, with 20 million trees covering 800,000 hectares, it is the second most important forest species in Morocco and, although neglected, is a very valuable resource. The tree holds great promise as an argan oil producer and constitutes a veritable “green curtain” against the relentless onslaught of the desert. Above all, it represents a source of income for people on the margins of society who have few other means of livelihood: in fact, the forest can provide subsistence for as many as three million people.

Marriage of tradition and progress

At the focal point of the struggle to preserve this tree, on which so many women condemned to poverty have pinned their hopes, stands a researcher from the Faculty of Sciences at Rabat, Zoubida Charrouf. She has focused her research efforts on argan oil in the profound conviction that any attempt to conserve the tree will fail unless the local community can become involved in putting its products to economic use.

At the heart of the campaign is a research project supported by the International Development Research Centre (IDRC). This project has two objectives: to preserve the argan forest by finding a sustainable economic use for its products, and to improve the social and economic status of rural women. Toward this end, the British Embassy has helped purchase equipment for the Amal cooperative.

Traditional knowledge in the form of a simple gesture repeated thousands of time is key to the project’s success. Since time immemorial, the women who live in arid regions — particularly in southwestern Morocco — have depended on this almost mythical tree. Its wood is used as fuel, its leaves and seeds as feed for goats. The tree has medicinal properties and its oil both nourishes and beautifies. Indeed, argan oil is reputed for its almost magical powers, but extracting it is difficult and time-consuming.

Then Dr Charrouf had a splendid idea: form a cooperative among the destitute and illiterate women who depend on argan oil, help them mechanize the process, and sell their output so they can earn a decent living. Thus was born the argan oil cooperative, in Tamanar, 70 kilometres south of Essaouira. Today it employs nearly 50 women on a full-time basis, and another 100 part-time, and has the distinction of being the first female-run argan oil cooperative in Morocco.

The Tamanar cooperative is called Amal, the Arabic word for hope, and this is exactly what it has meant for its members: widowed or divorced for the most part, and all of them poor, they now have the chance to lead a life of dignity as full members of society.

With monthly earnings of 600 dirhams (approximately 55 GBP), these women — the eldest of whom has proudly celebrated her 80th birthday — are now masters of their own destiny since they have accepted responsibility for running the cooperative, after being trained in extraction techniques, processing, management, organization, and marketing. “We want to earn respect and show that we can take care of ourselves. We don’t want to depend on anyone,” says one. And those who are most determined have immersed themselves in the literacy courses offered by the cooperative: for two hours a day they learn to read, write, and count, so that they will be ready to take decisions.

Life for women in Tamanar has changed, slowly but surely. They are convinced of it, that they carry considerable social weight, and that their cooperative is a force to reckon with. “Men used to forbid their wives to work here. Now they come and ask for jobs for their wives,” says one member of the cooperative. And because mothers and wives have their own income, economic activity is starting to take off in Tamanar. So is business: grocers can sell their produce, turnover is lively in the souks, and a solid purchasing power is making itself felt. “We’re not that big, we’re no Constantinople, but things are a far cry from what they used to be,” says Dr Charrouf.

The argan and its products are an inexhaustible source of blessings, for women, for the region, and for the struggle against desertification since cooperative members are also helping to replant the argan forest: each has committed herself to planting 10 trees a year. Local tourism has also received a boost, and close to 100 people come every day to visit the cooperative. Tamanar has become the capital of the argan industry, thanks to the mechanization of production.

The Berber women no longer have to put in 20 hours of backbreaking work to extract a litre of oil. To see them crushing the nuts and roasting them while singing and dancing as their mothers and their grandmothers used to do, one might not suspect that they are fully plugged into electronic commerce. In fact, the Amal cooperative is well established on the Internet through its website and accepts orders from far-away countries. And all of this success is due strictly to the efforts of women.