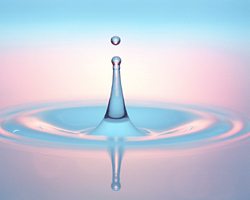 All agents were tested using a discrete shuttle-type conditioned avoidance task in mice. Essential oils of peppermint (Mentha piperita) and chamomile (Anthemis nobilis) exhibited central nervous system stimulant-like effects; that is, they increased the response rate (number of shuttlings/min) of the avoidance response.

Essential oils of 12 other plants, including juniper, patchouli, geranium, jasmine, clary sage, neroli, lavender, lemon, ylang-ylang, niaouli, vetivert and frankincense had no effect on the avoidance response in mice. This year, spring cleaning is more than ever about doing a really deep, deep clean. Here are are easy tips how to do this . . .

END_OF_DOCUMENT_TOKEN_TO_BE_REPLACED Making changes to improve your health can feel overwhelming. But just a few simple modifications can impact your health dramatically. Here are three easy changes you can make now to transform your health: Eat your water Are you thirsty? Up to 75 percent of Americans may be functioning in a chronic state of dehydration. This […]

END_OF_DOCUMENT_TOKEN_TO_BE_REPLACED Mindfulness and its proven impact on loneliness: What you should know

Maybe you know someone who stands by taking five minutes each morning to meditate or finds time after lunch to quiet his or her mind and focus on breathing. Whatever the method may be, incorporating “mindfulness” practices into your life can have a wide range of positive health benefits like improving your memory, sleep and […] Contrary to what you would expect, geranium bourbon essential oil is derived from a plant that belongs to the Pelargonium, not the Geranium genus of Geraniaceae. Back in 1737, the father of modern botanical nomenclature, Carolus Linnaeus, combined the entire genus of the Geraniaceae together in his epic work ‘Species Plantarum’. Although all the genera […]

END_OF_DOCUMENT_TOKEN_TO_BE_REPLACED The type of cypress essential oil used in aromatherapy is obtained exclusively from the leaves of Cupressus sempervirens, although it is not uncommon to find inexperienced oil suppliers offering incorrectly labelled cypress oil derived from other cypress species. This is because “cypress” is the common name given to several genera of evergreen, aromatic trees and […]

END_OF_DOCUMENT_TOKEN_TO_BE_REPLACED Eucalyptus radiata essential oil is growing in popularity in aromatherapy. Learn about its history, properties, and the many ways it can be used to improve health and wellbeing . . .