All About Ginger Essential Oil by Quinessence 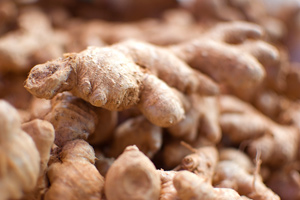 Since time immemorial ginger has been valued as a spice and medicine, and today it is still traded as a valued commodity around the world, either fresh, dried, ground, crystallised, candied, or preserved.

As if all of that is not enough, the plant also provides one of the most effective and therapeutic tools available to the aromatherapist; ginger essential oil.

The origin of ginger (Zingiber officinale) is believed to be Southern Asia, although precisely where within this region has never been determined. We do know that the herb has been part of Chinese traditional medicine for well over 3,000 years, and is mentioned in the oldest currently-known pharmacological record in China, Emperor Shen Nung’s Pen-ts’ao Ching (Canon of Herbs), which was written around 2,700 BCE.

Over a thousand years before the birth of Christ, dried ginger and other spices were traded from India to the Middle East via Arabia, but the true sources of these aromatics were kept secret by the crafty traders for another thousand years. Eventually, the herb found its way from India to Gaza and Alexandria by way of the Red Sea, and from there it was traded to the Egyptians, Greeks and Romans who used it extensively regardless of it being heavily taxed.

After being introduced to England in the early 11th century ginger became the second most popular spice after black pepper, and remained so for over a hundred years, despite its high cost. In the 16th century the Portuguese transported ginger from India directly to their West African colonies, and soon it could be found growing in Mexico, Central America, and the Caribbean islands.

Ginger is cultivated extensively around the world, but the principal countries that produce ginger essential oil and oleoresin in commercial quantities are currently limited to China, India, Jamaica, Madagascar, Nigeria, Sierra Leone and Sri Lanka.

Zingiber officinale is a tropical herbaceous perennial that grows from a knotty, tuber-like rhizome (horizontal stem) with thick lobes that vaguely resemble stubby fingers or thumbs and widely branching fibrous roots. The colour of the rhizome varies from buff to dark brown according to the soil and climatic conditions it’s grown under.

A leafless flower stalk grows from the root alongside the stem, terminating in a coniferous looking conical spike from which pale green-yellow flowers develop in clusters of 2 or 3 between the bracteal scales. However, these flowering stems rarely develop in cultivated plants. The flowers have an aromatic odour, and the stems when bruised are also mildly fragrant, but ginger essential oil is extracted from the rhizome only.

The expertise garnered by the Chinese and Indian physicians who used ginger for thousands of years quickly spread along with its increased availability, and soon many cultures around the world learned of it’s great affinity with the digestive system. Taken as a decoction it was (and still is) used universally to treat heartburn, indigestion, stomach cramps, nausea, vomiting, motion sickness, diarrhoea, dysentery, colic and flatulence.

It was also used to treat coughs, colds, fevers, respiratory conditions, arthritis, rheumatism, muscular aches and period pains. Confucius, Dioscorides, Galen and Gerard, are just some of the luminaries throughout history who extolled the virtues of this amazingly effective herb in their writings.

When cultivated for essential oil, the collection of ginger takes place before the rhizomes reach full maturity when they contain the most essential oil, flavour and pungency. If left too long, these important attributes begin to diminish, so as usual, great skill is required when choosing the time to harvest the rhizomes. They must be handled carefully when using either manual or mechanized methods for digging them up since damage causes the loss of volatile oil plus a risk of fungal infection. After lifting, the roots are removed and the rhizomes washed and sun-dried to reduce moisture content.

The unpeeled, dried ginger rhizomes are coarsely ground before processing by steam distillation, which may take up to 20 hours for large charges. To obtain the maximum oil yield, cohobation is also usually required. Ginger essential oil is a pale-yellow to amber colour according to origin, with a richly complex, fresh, sweet, warm and spicy aroma that also reveals a lemony top note, plus balsamic woody and slightly earthy undertones.

The warming, stimulating and tonifying properties of ginger oil help improve poor circulation, warm cold hands and feet, as well as easing muscle strains, backache, arthritis and rheumatism. Blend ginger essential oil together with other invigorating oils such as black pepper, marjoram sweet and rosemary in massage for these conditions.

Since ginger essential oil is an arterial stimulant, it makes it a valuable oil in skin care to revitalize and bring a glow back to a dull or tired complexion. Ginger is very effective in relieving motion sickness and nausea, particularly when combined with peppermint essential oil. Inhale from a tissue, or use these oils in a massage before travelling. For those who suffer from a lack of confidence, indecision, or a general lack of motivation, ginger oil helps bring strength, determination and clarity.

Ginger is included in the Hindu manual of medicine, the Ayurveda, and is mentioned in early Sanskrit texts dated around 1,500 BCE.

If you want to find out how to use your essential oils quickly and easily, you can't do better than our Aromatherapy Lexicon.

With one spin of the wheel you have at hand all the best essential oils for your condition, plus you are given all the ways that the oils can be used.

With our Lexicon, choosing the right essential oil couldn't be any easier!

The pungent flavour associated with ginger is due to certain water-soluble compounds (phenylpropanoid-derived), so conventional steam or water distillation is unable to carry them over into the essential oil.

This means that although ginger essential oil smells and tastes like the herb, it will not have the pungent heat associated with ginger.

However, supercritical C02 extraction is able to capture all of the pungent qualities which are mainly due to the compounds gingerol and shogaol.