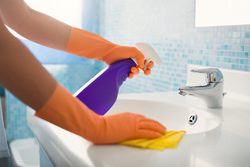 The burgeoning natural and organic household product sectors are solid evidence that the public is becoming increasingly conscious of the importance of avoiding synthetic chemicals. But a new study presented at the 241st National Meeting and Exposition of the American Chemical Society (ACS) has revealed that some “green” cleaning products still contain ingredients derived from petroleum.

In an analysis of more than a dozen different commercial liquid laundry detergents, dishwashing liquids, and hand cleansers, researchers found that some of them contained as much as 57 percent carbons derived from petrochemicals. And some of these even bore labels saying “petrochemical free,” which indicates some major discrepancies within the industry.

“The plant-derived carbon content of the product samples tested was largely inconsistent with some of the content claims made on packaging,” said chemist Cara A.M. Bondi who worked on the project. “For example, a liquid laundry detergent that makes the claim ‘petrochemical free’ contained only 69 percent plant-based carbon, meaning that 31 percent of the carbon in this sample is, in fact, petroleum-derived.”

In hand cleansers, plant-based carbons represented anywhere from 28 to 97 percent of overall carbons, depending on the brand. Liquid laundry detergents ranged from 28 to 94 percent, and dishwashing liquids from 43 to 95 percent. Even so, all products marketed or labeled as green contained 50 percent or more plant-based carbon than non-green alternatives.

Seventh Generation (SG), a highly reputable name in the green products industry, says that because there is no official standard for regulating claims made by companies marketing their products as “green,” “sustainable,” or “eco-friendly,” there is no verifiable way to determine whether or not their claims are accurate. So SG has proposed making carbon-14 dating, a technique that identifies whether or not carbon molecules are of a natural and renewable origin, the modus operandi for testing green products. The company effectively used carbon dating in its tests to determine the presence of petroleum-based carbon.

SG did not reveal the names of the companies or products that contained petrochemicals, and instead chose to promote the carbon dating testing method as a way for companies to help improve their products. An SC representative stated that the findings were an “opportunity to align and move forward in a way that adds value to the consumer and to the industry.”

END_OF_DOCUMENT_TOKEN_TO_BE_REPLACED Niaouli essential oil is obtained from the tree of the same name and is finally being recognised for its powerful healing properties. Learn about its history, benefits and many uses . . .

END_OF_DOCUMENT_TOKEN_TO_BE_REPLACED

Niaouli essential oil is obtained from the tree of the same name and is finally being recognised for its powerful healing properties. Learn about its history, benefits and many uses . . .

END_OF_DOCUMENT_TOKEN_TO_BE_REPLACED

Knowing how to choose the right carrier oils can be bewildering for newcomers to aromatherapy, because specialist suppliers usually offer such a wide range of them . . .

END_OF_DOCUMENT_TOKEN_TO_BE_REPLACED

Aromas have a powerful effect on our mind and body, and certain ones can be use to manage stress effectively. Here are some oils and methods to help beat stress . . .