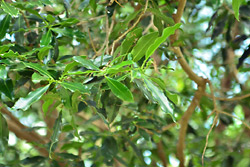 The species is on listed on the IUCN Red list and categorized as Vulnerable amid concerns about over-exploitation; the World Agroforestry Centre runs a project to preserve the tree. Dr. Alice Muchugi of the World Aagroforestry Centre recently spoke to Yvonne Otieno, IUCN CEC member, about the tree’s uses, potential, threats to its existence and ongoing research.

Q. Tell us more about the tree and where it is found.
A. It occurs in lowland rainforest, upland dry evergreen forest and in some swampy forests. Geographically the species is found in Democratic Republic of Congo, Ethiopia, Kenya, Tanzania, Uganda, Malawi, South Africa and Swaziland. In Kenya the species occurs widely in the highland forests (Aberdares, Cherangani, Chyulu, Karura, Mt Elgon, Rumuruti, Taita) and riverines of savannah woodlands (Masai Mara, Baringo).

Q. What are some of its uses?
A: W. ugandensis is widely used by the local communities living within the plant’s natural range to cure several ailments such as stomach-ache, constipation, toothache, common cold, cough, fever, muscle pains, weak joints, candidiasis, measles and malaria, as well as livestock diseases e.g. trypanasomiasis. It looks like it rivals the widely known neem tree (Azadirachta indica) in herbal remedies use that is claimed to cure “40 diseases”.

W. ugandensis plant extracts have high antimicrobial activity, meaning that it can kill many disease-causing microorganisms. Laboratory experiments support these claims. Although most of the plant parts (leaf, twigs, stem and root bark) display antimicrobial potency, the stem bark is the most widely used by traditional healers and medicine-men. As is the case in several medicinal plants, most bark is harvested from natural forests.

Q. Seeing that the tree has so many uses, is it under any threat?
A. Over-harvesting of the stem bark leads to the death of the tree hence threatening the species’ survival. In addition, the tree provides good timber and has been indiscriminately felled in some natural forests like Rumuruti (Kenya). There has also been a lot of encroachment of the natural forests for farming and settlement. Consequently, the survival of the species is under threat, but this status has not been reviewed by WCMC or IUCN except for the sub-species longifolia found in Tanzania. Review for such listing is needed.

Q. What research does the World Agroforestry Centre conduct on the tree?
A. For the last five years our interest in the species has been how the medicinal benefits can be sustained and its survival ensured. Surveys on existing natural forest in Kenya, Uganda and Tanzania show the species populations declining at an alarming rate and hence the need for urgent conservation measures. Incorporation of the tree in cropland will contribute to conservation. Several remnant trees are found on farmland generated from encroached natural forests. Here the species does not affect the food crop growing beneath it.

Q. What does is it mean to the public farmers and/or conventional and herbal medicine?
A. Our research results have shown that the species is very easy to propagate and also grows fast. These are characteristics farmers prefer in tree domestication.

Currently, W. ugandensis herbal preparations are in the local market in Kenya and Uganda. A species in the same genus native to southern Africa, Warburgia salutaris herbal products are in the international market and can be purchased on-line.

Interestingly, W. ugandensis is a common tree within East African urban centres where it is planted for aesthetic value; it is evergreen! And when it comes to ceremonial tree planting sessions, of course W. ugandensis is the tree of choice!

Q. So what next in terms of research?
A. Current research activities aim to encourage on-farm planting to reduce harvesting pressure on natural forest, and to develop better farming techniques for the species. This includes both propagation and management of plant on farm and sustainable harvesting for the herbal industry.

The Centre is also doing more research focusing on production of more leaves than the bark and exploring the genetic manipulation to over-express important phytochemicals in the leaves and W. ugandensis extract based drug discovery for neglected diseases such as leishmaniasis and human trypansomiasis is also being explored with collaborating institutions

The Centre is encouraging the on-farm planting of the species for supply of the herbal extracts as well its conservation. Most of the mature W. ugandensis existing on farmers fields are remnants of the cleared forests or wildings collected locally. As these trees will be future seed sources, it is important to ensure that they are of wide genetic base.