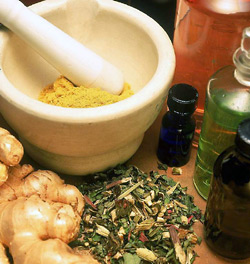 For roughly two thousand years, Chinese herbalists have treated Malaria using a root extract, commonly known as Chang Shan, from a type of hydrangea that grows in Tibet and Nepal. More recent studies suggest that halofuginone, a compound derived from this extract’s bioactive ingredient, could be used to treat many autoimmune disorders as well. Now, researchers from the Harvard School of Dental Medicine have discovered the molecular secrets behind this herbal extract’s power.

It turns out that halofuginone (HF) triggers a stress-response pathway that blocks the development of a harmful class of immune cells, called Th17 cells, which have been implicated in many autoimmune disorders.

“HF prevents the autoimmune response without dampening immunity altogether,” said Malcolm Whitman, a professor of developmental biology at Harvard School of Dental Medicine and senior author on the new study. “This compound could inspire novel therapeutic approaches to a variety of autoimmune disorders.”

“This study is an exciting example of how solving the molecular mechanism of traditional herbal medicine can lead both to new insights into physiological regulation and to novel approaches to the treatment of disease,” said Tracy Keller, an instructor in Whitman’s lab and the first author on the paper.

This study, which involved an interdisciplinary team of researchers at Massachusetts General Hospital and elsewhere, will be published online February 12 in Nature Chemical Biology. Prior research had shown that HF reduced scarring in tissue, scleroderma (a tightening of the skin), multiple sclerosis, scar formation and even cancer progression. “We thought HF must work on a signaling pathway that had many downstream effects,” said Keller.

In 2009, Keller and colleagues reported that HF protects against harmful Th17 immune cells without affecting other beneficial immune cells. Recognized only since 2006, Th17 cells are “bad actors,” implicated in many autoimmune diseases such as inflammatory bowel disease, rheumatoid arthritis, multiple sclerosis and psoriasis. The researchers found that minute doses of HF reduced multiple sclerosis in a mouse model. As such, it was one of a new arsenal of drugs that selectively inhibits autoimmune pathology without suppressing the immune system globally. Further analysis showed that HF was somehow turning on genes involved in a newly discovered pathway called the amino acid response pathway, or AAR.

Scientists have only recently appreciated the role of the nutrient sensing-AAR pathway in immune regulation and metabolic signaling. There is also evidence that it extends lifespan and delays age-related inflammatory diseases in animal studies on caloric restriction. A conservationist of sorts, AAR lets cells know when they need to preserve resources. For example, when a cell senses a limited supply of amino acids for building proteins, AAR will block signals that promote inflammation because inflamed tissues require lots of protein.

“Think about how during a power outage we conserve what little juice we have left on our devices, foregoing chats in favor of emergency calls,” said Whitman. “Cells use similar logic.” For the current study, the researchers investigated how HF activates the AAR pathway, looking at the most basic process that cells use to translate a gene’s DNA code into the amino acid chain that makes up a protein.

The researchers were able to home in on a single amino acid, called proline, and discovered that HF targeted and inhibited a particular enzyme (tRNA synthetase EPRS) responsible for incorporating proline into proteins that normally contain it. When this occurred, the AAR response kicked in and produced the therapeutic effects of HF-treatment.

Providing supplemental proline reversed the effects of HF on Th17 cell differentiation, while adding back other amino acids did not, establishing the specificity of HF for proline incorporation. Added proline also reversed other therapeutic effects of HF, inhibiting its effectiveness against the malaria parasite as well as certain cellular processes linked to tissue scarring. Again, supplementation with other amino acids had no such effect. Such mounting evidence clearly demonstrated that HF acts specifically to restrict proline.

Nevertheless, “AAR pathway is clearly an interesting drug target, and halofuginone, in addition to its potential therapeutic uses, is a powerful tool for studying the AAR pathway,” said Whitman.

Are You Eating Your Way Into Old Age?