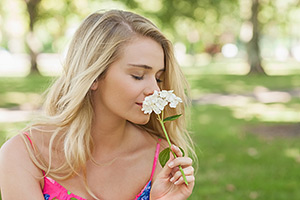 The sense of smell is the most basic and primitive of all our senses, and is of vital importance to humans since it helps with the survival of our species. It’s also a vital function for the appreciation of aromatherapy too!

For our prehistoric ancestors, smell was equally as important as vision in the battle for survival, since certain odours such as smoke and rotting flesh would often signal danger. Without the sense of smell, humans would not have survived the evolutionary process.

In the modern world we perceive the world mainly through our eyes and ears, and in fact the sense of smell is now repressed and controlled in a way that nature never intended. Just think about the way we try to mask any smells in daily life that we feel are unpleasant and unsociable by using deodorants and air-fresheners. Smell is still very important to us, except now we seem to have become tolerant to only pleasant odours.

Aromatherapy is a perfect example of this. Even though a particular essential oil may be precisely what is required to treat a physical condition, clients in a clinic will often object during a treatment if they do not like the aroma of the oil. The knowledge that smells can have a powerful effect on the mind has been known since ancient times. Precisely how this comes about however, is still not fully understood despite a vast amount of modern research.

How does the sense of smell work?

Have you ever wondered how the nose distinguishes between the delicious aroma of cooking food and the danger signals of something burning? The process of smelling is called olfaction and is incredibly complicated, taking place in several areas of the brain including the limbic system which itself has approximately 34 structures and 53 pathways. The limbic system is linked to the perception of odour, sensations of pleasure and pain, emotions like rage, fear, sadness and sexual feelings.

When we sniff to distinguish a particular odour, molecules emitting from the substance travel through the air and enter the nose. There are 50 million smell receptors located at the top of the nasal cavity occupying an area the size of a small postage stamp. These slender nerve receptors are called ‘cilia’ and are connected to an organ called the olfactory bulb (bulbus olfactorius), which in turn is connected directly to the brain. 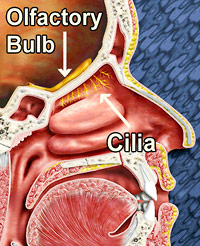 Each receptor is used over and over to define different odours, just like letters are used over and over again to spell different words. This ingenious system greatly reduces the number of sensors (letters) needed to code for smells (words). The way that different and overlapping combinations of letters can spell ‘red,’ ‘read,’ or ‘reed,’ similar combinations of sensors can identify for example, neroli, jasmine, or rose.

Despite all the continual research it is still not known exactly how the brain converts these odour molecules into the smell that we perceive. However, scientists have determined that the human brain can easily identify subtle differences between thousands of odours which proves that the sense of smell is one of the most remarkable assets of the human body.

Researchers at Harvard University believe that the remnant of an organ located in the human nose was once responsible for detecting chemical signals given off by other humans. However, this sixth sense used by our distant ancestors is no longer present in modern humans since it was lost due to the effects of genetic mutation.

Located just behind our nostrils are two tiny pits known as the Vomeronasal organ (VNO), but this organ no longer appears to function in humans. For a period of time during the development of an embryo the VNO exists with pits and tubes together with nerve endings which connect to the brain. However, several weeks later the organ ceases developing and begins to deteriorate.

In animals, the organ contains nerves that respond to chemicals called pheromones that are secreted by many other animals. In many creatures, pheromones trigger a variety of instinctive behaviours such as aggression and mating. However, whether or not humans have the ability to detect pheromones is still hotly debated by scientists.

Professor Catherine Dulac at Harvard University’s Department of Molecular and Cellular Biology believes that humans no longer have this ability, ‘It’s lost to evolution, – even apes and gorillas, our evolutionary first cousins, no longer rely on it to find mates.’, she claims. So much for those expensive perfumes claiming to contain human pheromones that will attract the perfect partner!

Research conducted by scientists and universities around the world is continually investigating the way that odours influence our emotions. Unsurprisingly, very little is ever heard about the results of such research because the knowledge gained will be put to use in some revolutionary new application or product. Certainly, already some of the information discovered has been quietly put to use in our daily lives, even though we are probably not consciously aware of it.

For example, specially formulated aromas are already being released in some supermarkets and stores to encourage customers to spend more money, and in factories and office environments aromas are released to help staff work more efficiently and productively. It’s hard to imagine what will be next, but whatever it may be, it is extremely unlikely we will be told in advance of its release to market.

Research has established that essential oils have an influence on the Limbic System in the brain which brings about changes in the brains chemistry, and this in turn can influence our emotions. Precisely which emotion is evoked when experiencing a fragrance will of course depend on the natural chemistry of the particular oil concerned.

Scientists now believe that all of our emotions are the result of neurochemicals such as noradrenaline and serotonin being released into the bloodstream, and mood swings are thought to be a result of these influences, particularly when they are in the extreme. Given these facts it’s not hard to see how essential oils can help balance and influence our moods.

Learn more about how essential oils influence our moods.

Effect Of The Limbic System In Aromatherapy

Essential Oils To Overcome A Lack Of Motivation

END_OF_DOCUMENT_TOKEN_TO_BE_REPLACED