Coriander Oil Could Be Natural Alternative To Antibiotics 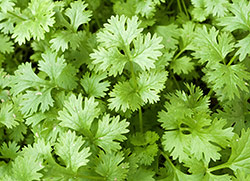 Coriander essential oil (Coriandrum sativum) has been shown to be toxic to a broad range of harmful bacteria. Its use in foods and in clinical agents could prevent food-borne illnesses and even treat antibiotic-resistant infections, according to the authors of a study published in the Journal of Medical Microbiology.

Researchers from the University of Beira Interior in Portugal tested coriander essential oil against 12 bacterial strains, including Escherichia coli, Salmonella enterica, Bacillus cereus and meticillin-resistant Staphylococcus aureus (MRSA). Of the tested strains, all showed reduced growth, and most were killed, by solutions containing 1.6% coriander oil or less.

Coriander is an aromatic plant widely used in Mediterranean cuisine. Coriander oil is one of the 20 most-used essential oils in the world and is already used as a food additive. Coriander oil is produced from the seeds of the coriander plant and numerous health benefits have been associated with using this herb over the centuries. These include pain relief, ease of cramps and convulsions, cure of nausea, aid of digestion and treatment of fungal infections.

This study not only shows that coriander essential oil also has an antibacterial effect, but provides an explanation for how it works, which was not previously understood. “The results indicate that coriander oil damages the membrane surrounding the bacterial cell. This disrupts the barrier between the cell and its environment and inhibits essential processes including respiration, which ultimately leads to death of the bacterial cell,” explained Dr Fernanda Domingues who led the study.

The researchers suggest that coriander essential oil could have important applications in the food and medical industries. “In developed countries, up to 30% of the population suffers from food-borne illness each year. This research encourages the design of new food additives containing coriander oil that would combat food-borne pathogens and prevent bacterial spoilage,” said Dr Domingues.

“Coriander oil could also become a natural alternative to common antibiotics. We envisage the use of coriander in clinical drugs in the form of lotions, mouth rinses and even pills; to fight multidrug-resistant bacterial infections that otherwise could not be treated. This would significantly improve people’s quality of life.”

A healthy menstrual cycle is important for pre-menopausal women for their comfort, wellbeing and peace of mind. However, many females experience problems with their cycle at some point in their lives. From irregular periods, to premenstrual syndrome, there is an array of things that can make the menstrual cycle a source of stress for women. […]

END_OF_DOCUMENT_TOKEN_TO_BE_REPLACED

Deaths From Heart Disease Are Increasing – Are You At Risk?

After years of decline, since 2012 deaths from cardiovascular diseases, such as heart attack and stroke, have been rising dramatically . . .

END_OF_DOCUMENT_TOKEN_TO_BE_REPLACED

Myrrh essential oil is obtained from an oleo-gum resin, and it has a wide range of therapeutic benefits. Learn about its history, properties and how to use it in aromatherapy . . .

END_OF_DOCUMENT_TOKEN_TO_BE_REPLACED Palmarosa essential oil is obtained from a sweet lemon-scented grass from India – learn about its history, properties and many therapeutic benefits in aromatherapy . . .