Do Ginger And Feverfew Ease Migraines? 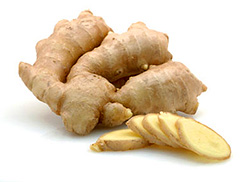 Migraine sufferers treated with a homeopathic preparation of ginger and the herb feverfew may find some pain relief, according to a preliminary study.

Feverfew, which is derived from a flowering plant, has long been thought to be a remedy for headaches. It might offer an alternative to standard migraine medications, which are costly, have side effects and don’t always work, according the new report.

About 12 percent of Americans get migraines, and the problem has been estimated to cost the U.S. some $20 billion annually in lost productivity and medical care.

In the new study, researchers funded by PuraMed Bioscience, which makes the feverfew/ginger treatment, randomly assigned patients to take a preparation containing miniscule amounts of the two plants or a dummy treatment.

The patients were asked to treat themselves — by putting a little sachet with the preparations under their tongue — as soon as they recognized the signs of an approaching migraine.

Forty five people took the homeopathic treatment and 15 took the placebo. About a third of those who took feverfew and ginger were pain-free after two hours, compared to only half as many in the placebo group.

Because the study was small, it’s possible that those randomly assigned to take the placebo simply experienced more severe migraines to begin with. But study researcher Dr. Roger Cady said that was unlikely.

“I don’t think that accounts for the differences in efficacy here,” Cady, who directs the Headache Care Center in Springfield, Missouri, told Reuters Health.

While he thinks the findings are real, it’s still unclear how exactly the treatment would work, he added.

The homeopathic preparation, called LipiGesic, sells for $29.95 for several doses.

Cady says people who experience migraines slowly, and therefore have the ability to treat them early and before they become severe, would be the best candidates to try the feverfew therapy.

Wells said the study had some flaws and noted that one of the authors is also the CEO and chairman of PuraMed Bioscience. “Still”, she said, “it’s important to have studies on complementary or alternative therapies, particularly for people who suffer migraines.”

A recent study by Wells and her colleagues, published along with the new results in the journal Headache, found that people who deal with migraines or severe headaches are more likely than others to seek out complementary or alternative remedies, such as meditation, yoga and herbal treatments.

“We found that 50 percent of adults with migraine or severe headaches, which is 13.5 million Americans, used complementary and alternative medicine in the previous year,” Wells told Reuters Health.

Among people who don’t have migraines or severe headaches, 35 percent used complementary or alternative approaches to wellness or diseases.

“We need more research to understand the mechanisms, benefits, side effects and risks of complementary and alternative therapies,” concluded Wells.