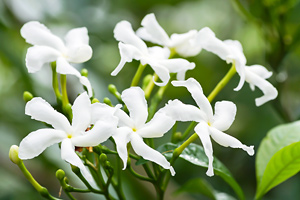 Jasmine sambac absolute is extracted from the beautifully fragrant flowers of Jasminum sambac, and the aroma of this oil is both mysterious and alluring in equal measures.

It is a typical example of a fragrance that must be experienced rather than described, and could perhaps be described as, jasmine ‘plus’.

Also known in the West as Arabian jasmine, Tuscan jasmine and Zambac, the plant produces two distinct types of flower; one is a single flowered variety and the other displays a double flower (J. Sambac var. plenum). The double flowered variety is larger than the single but is actually less fragrant. Both types of flower bloom throughout the greater part of the year. During the latter part of the seventeenth century the single headed variety was introduced into Britain, with the double-flowered variety arriving many years later.

From the Oleaceae family, Jasminum sambac is a slender, erect or climbing evergreen bush that is capable of growing from 1 to 3 metres in height, and is more shrubby and woody than J. grandiflorum. Its sturdy branchlets are encompassed by elliptic or obovate, dark green compound leaves and adorned with tubular, star-shaped white to pale yellow flowers that are thicker and more waxy than J. grandiflorum. They grow either as an individual blossom or in clusters at the tips of branches.

The health-giving properties of this tree are voluminous, and have been used for centuries in many cultures. In rural India the juice from ground flowers is applied to wounds or sores, and a paste made from the ground root is used for labour pain. In Borneo, the young leaf is boiled and the infusion is taken for 3 weeks to treat gallstones. The root is boiled and the infusion is taken internally to treat diabetes mellitus.

The root is also used in China to treat headaches, insomnia, and pain due to dislocated joints and broken bones since it is reported to have anaesthetic properties. In the Philippines the plants various parts are used for fever, abdominal distention and diarrhoea, redness and swelling of the eyes, sprains and fractures. For hundreds of years throughout Asian countries, sambac has been used for culinary purposes, being employed in teas, liqueurs, dairy desserts, candy and puddings.

In India, the largest harvest is gathered from April through to July, and later in the year smaller amounts are collected during August and September, and again in January and February. Unlike J. grandiflorum which is collected in the early morning at sunrise, J. sambac is harvested in mid to late-morning while the buds are still partially closed.

The buds must be picked by hand and transported quickly to the cool environment of distillery within a few hours of picking, since in common with the buds of J. grandiflorum, jasmine sambac buds will continue to develop their fragrance and are highly perishable at this stage. The absolute is produced by extraction of the concrete, and it requires over 8 million blossoms to eventually produce 1 kilo of jasmine sambac absolute. A true labour of love!

The fragrance of jasmine sambac oil is alluring, sultry, sensual and mysterious, and as usual – very difficult to describe in words! It is a typical example of a fragrance that must be experienced rather than described. It shares many similarities to the aroma J. grandiflorum with subtle overtones which are slightly more green, and vaguely reminiscent of Neroli. It is quite distinguishable from J. grandiflorum and does not possess its intense sweet ‘headiness’ that some people dislike. This is what makes it so useful in the world of natural perfumery – it produces a sharper jasmine note that does not cloy.

Like its close relation, in aromatherapy jasmine sambac absolute has a relaxing effect on the body whilst being stimulating to the senses, which perhaps goes some way to explain its renowned action as an aphrodisiac. It promotes a state of relaxation and peace which helps to block sexual inhibitions, allowing female and male energies to be released in a natural way. This is a very sensual and intoxicating oil!

Sambac is one of the finest oils for balancing and opening up emotional states; it counteracts selfish thoughts and actions opening up the way for us to learn to love ourselves and others. It excels at empowering the meek at heart, and paving the way toward enlightenment and self-confidence, whilst promoting purity of heart. It is an extremely valuable emotional equaliser which helps us deal with the darker side of our nature, bringing sweetness to any destructive or detrimental thoughts.

Add a few drops of jasmine sambac absolute to an unfragranced cream or lotion base for a divine aroma that uplifts the senses whilst easing hot, dry, irritated or sensitive skin. It assists the removal of blemishes and improves the complexion, bringing out your skins natural radiance. Although it blends well with many other oils, in many ways in aromatherapy jasmine sambac is best enjoyed alone or with just a hint of another oil such as lavender – otherwise it its unique aroma will be overshadowed or lost in the blend.

However, there is one exception to this. Blended with a little sandalwood oil, the aroma of jasmine sambac becomes truly celestial, and is similar to the Indian attar known as ‘Motia’. Whenever I have any difficulty sleeping due to an overactive mind or a particularly stressful day, this is one of my preferred blends to vaporise. A bit self-indulgent admittedly, but very, very effective!