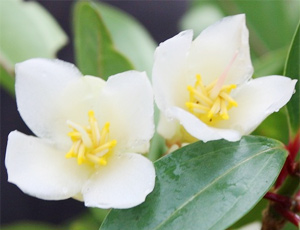 A new flowering plant belonging to the Medinilla plant group has been discovered in the highlands of Matasawalevu village, on the island of Kadavu in Fiji. The plant was found during a biodiversity assessment of the Nakasaleka district carried out as part of the International Union for Conservation of Nature’s ‘Water and Nature Initiative’ (WANI).

There are around 193 known species of Medinilla, occurring in Madagascar, Africa, South Asia and the Pacific Islands. Of the 193 species, 11 can only be found in Fiji. One of them is the Tagimoucia flower, Medinilla waterhousei, the floral emblem of Fiji.

The Water and Nature Initiative works with local communities to help them better manage water resources on Kadavu island. The team was monitoring the degradation of the river basin in the area when the new plant was discovered.

“The discovery of this previously unknown species of plant gives us a sense of just how fragile nature can be,” says Dr Milika Sobey, Water and Wetlands Programme Coordinator at IUCN’s Oceania Regional Office. “The fact that it was found during work on a watershed management project is one more lesson in how important it is that nature is included in the priorities for water management.”

“Through the Water and Nature Initiative IUCN has shown in more than 30 countries worldwide that by working with local people and partners, it is possible to put in place sustainable solutions that meet the water needs of both people and nature,” says Dr Mark Smith, Director of the IUCN Global Water Programme.

The species was found on the border of grassland and primary forest. This location makes it highly vulnerable to bush fires that are common in the area.

“We only managed to find one plant of this kind,” says Mr Marika Tuiwawa, of the University of the South Pacific’s Institute of Applied Science, IUCN member and partner in the WANI project, who discovered the species. “Commercial agricultural activities and uncontrolled bush fires are the main threats to this species. A simple fire could destroy it in a matter of minutes.”

The plant’s common name has not been confirmed yet but the name Medinilla matasawalevu has been suggested to illustrate its location.

“The fact that only one plant of this kind was found so far and that it occurs in such a vulnerable place should set alarm bells ringing,” says Dr Jane Smart, Global Director of IUCN’s Biodiversity Conservation Group. “The challenge now is to protect the new species and raise awareness of its importance among local communities, to secure its long term future.”

Work is currently underway to confirm the exact classification of the new species, for which DNA research may be carried out.