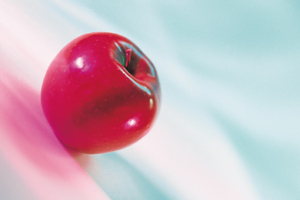 You know what they say about an apple a day, right?

Well, emerging research about a compound found in apple peels might now help explain why that Red Delicious may indeed help keep you out of the doctor’s office.

It turns out that the skins of apples are naturally loaded with a substance called ursolic acid…that could become an important ally in fighting cancer, heart disease, diabetes, and muscle wasting. (How’s THAT for an impressive healing resume?)

Research has shown that the acid may be an important cancer-fighting tool. Researchers theorize that the natural compound works its anticancer magic by suppressing several tumor-promoting genes and by inhibiting the production of cancer cells.

Now a new study, published in the June issue of the journal Cell Metabolism, has found that ursolic acid could be an antidote for the type of muscle wasting that’s seen with prolonged illness or just normal aging. While the research is in its early stages…we’re talking mice studies here… it’s still very exciting.

To start with, researchers from the University of Iowa isolated 63 muscle-related genes that change in response to fasting in both mice and humans and an additional 29 that also change in people who have spinal-cord injuries.

When they compared the unique signatures of those genes to cells that were treated with 1,300 bioactive small molecules, ursolic acid emerged as the possible winner against muscle atrophy.

Next, the scientists gave the acid to mice on a forced fast. As they had predicted, the compound protected the muscles of the fasting mice against the normal muscle weakening.

But when the researchers added ursolic acid to the feed of normal mice for several weeks they had some entirely unexpected results. Amazingly, the muscles of the mice began to grow! And the surprises didn’t end there…the mice also became leaner…dropping fat…and had drops in their blood glucose, cholesterol, and triglyceride levels.

Although you can get ursolic acid as a supplement, it isn’t widely available yest…so you might need to do some digging to find it. But, luckily, you can pick up ursolic-acid-rich apples at your local grocery store or farmer’s market. Just be sure to choose an organic variety whenever possible.

And if you’re not a fan of apples, I’ve got some good news for you as well. Although ursolic acid is the most concentrated in apple peels, you can also increase your intake by munching on prunes, cranberries, or basil, and by spicing more of your dishes with rosemary, oregano, and thyme.

This research has got me thinking that the only bad apple is the one not eaten. (Just make sure it’s an organic one!)