Home » Health Research » Sense Of Smell Is Boosted By Anxiety

Sense Of Smell Is Boosted By Anxiety 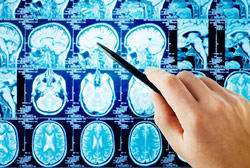 Anxious people have a heightened sense of smell when it comes to sniffing out a threat, according to a new study by Elizabeth Krusemark and Wen Li from the University of Wisconsin-Madison in the US.

In animals, the sense of smell is an essential tool to detect, locate and identify predators in the surrounding environment. In fact, the olfactory-mediated defense system is so prominent in animals, that the mere presence of predator odors can evoke potent fear and anxiety responses.

Smells also evoke powerful emotional responses in humans. Krusemark and Li hypothesized that in humans, detection of a particular bad smell may signal danger of a noxious airborne substance, or a decaying object that carries disease.

Their work is published online in Springer’s journal Chemosensory Perception. The study is part of a special issue of this journal on neuroimaging the chemical senses.

The researchers exposed 14 young adult participants to three types of odors: neutral pure odor, neutral odor mixture, and negative odor mixture. They asked them to detect the presence or absence of an odor in an MRI scanner. During scanning, the researchers also measured the skin’s ability to conduct electricity (a measure of arousal level) and monitored the subjects’ breathing patterns.

Once the odor detection task was over, and the subjects were still in the scanner, they were asked to rate their current level of anxiety. The authors then analyzed the brain images obtained.

They found that as anxiety levels rose, so did the subjects’ ability to discriminate negative odors accurately — suggesting a ‘remarkable’ olfactory acuity to threat in anxious subjects. The skin conductance results showed that anxiety also heightened emotional arousal to smell-induced threats.

The authors uncovered amplified communication between the sensory and emotional areas of the brain in response to negative odors, particularly in anxiety. This increased connectivity could be responsible for the heightened arousal to threats.

Krusemark and Li conclude: “This enhanced sensory-emotional coupling could serve as a critical mechanism to arouse adequate physiological alertness to potential insults.”

Choosing The Right Form Of Meditation Sweet fennel essential oil is obtained from the seeds of Foeniculum vulgare Mill. subsp. vulgare var. dulce, which belongs to the Apiaceae family of plants, and native to the Mediterranean . . .

END_OF_DOCUMENT_TOKEN_TO_BE_REPLACED Rosemary essential oil is derived from the flowering tops of the evergreen, shrubby herb found growing wild throughout Mediterranean countries, where it is believed to have originated. Known botanically as Rosmarinus officinalis and belonging to the Lamiaceae family, the upright form of this herb can reach a height of 1.8 metres, although there are other […]

END_OF_DOCUMENT_TOKEN_TO_BE_REPLACED

How To Avoid Sun Damaged Skin

Enjoying the sunshine is one of the best things about summer, but before you step outside you really need to know how to protect yourself effectively from the dangers of sun damaged skin . . .

END_OF_DOCUMENT_TOKEN_TO_BE_REPLACED

It’s never too late to start caring for your skin, and following a few simple tips can help you get the very best results possible – naturally . . .