Home » Health Research » The Most Powerful Dried Herb On Your Spice Rack?

The Most Powerful Dried Herb On Your Spice Rack? 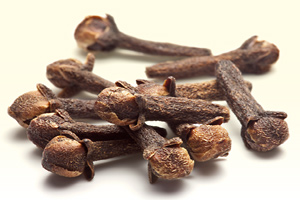 The curative properties of clove and its essential oil are legendary. Not only does it have the highest antioxidant value of any spice, its multiple range of uses are exemplary.

This unopened flower bud of a tropical tree, native of Indonesia, is also offered to local deities. When fresh, the clove is pink and turns rust-brown when dried. Clove essential oil, applied to a cavity in a decayed tooth, relieves toothache. The oil is also used to treat skin disorders such as acne, pimples, and severe burns.

Clove-infused water is used to treat stomach upsets, nausea and diarrhoea. Folklore says that sucking two whole cloves without chewing or swallowing them helps to curb the desire for alcohol.

Cloves were traded by Arabs in the Middle Ages as part of their buying and selling on the profitable Indian Ocean trade route. That’s how it happened to reach Europe and beyond.

Cloves, along with nutmeg and pepper, were highly prized in Roman times, and Pliny the Elder once famously complained that “there is no year in which India does not drain the Roman Empire of fifty million sesterces.”

At Christmas time, cloves can be pressed into an apple or the peel of an orange and used as a warm-smelling adornment in the kitchen or elsewhere in the house. Clove oil warmed in oil burners gives an aromatic holiday scent to any room.

In aromatherapy, clove bud essential oil excels when used in massage; its invigorating and analgesic action relieves muscular aches, stiff joints, sprains, arthritis and rheumatism. Similarly, its carminative action helps to relieve dyspepsia, colic and stomach cramps. It also has a powerful antiseptic and antifungal action which can be put to a wide range of uses. Eucalyptus globulus essential oil is extremely versatile with powerful antibacterial oil. Discover more about its history and many uses in aromatherapy . . .

END_OF_DOCUMENT_TOKEN_TO_BE_REPLACED German chamomile essential oil is derived from a medicinal plant that has truly stood the test of time during 2,000 years of medical use. Discover the history and uses of this versatile oil . . .

END_OF_DOCUMENT_TOKEN_TO_BE_REPLACED Usually when people think about the subject of hair loss, they tend to just have men in mind. However, there are plenty of women who suffer from hair loss too . . .

END_OF_DOCUMENT_TOKEN_TO_BE_REPLACED Natural beauty is fast becoming the ideal look as women rebel against old ideas of glamour. To become a natural beauty revolutionary just change your lifestyle and enjoy better health too . . .

END_OF_DOCUMENT_TOKEN_TO_BE_REPLACED Aromatherapy carrier oils can be used as the most natural and effective way to protect and renew your skin all year round. Here’s how . . .

END_OF_DOCUMENT_TOKEN_TO_BE_REPLACED

Hydrosols are safe, ‘ready to use’ aromatherapy products that can be used to care for the skin and revive and refresh flagging energy levels . . .

END_OF_DOCUMENT_TOKEN_TO_BE_REPLACED

Every second of every day, your body’s immune system is working tirelessly to protect you from invading bacteria, viruses and other disease causing organisms.