7 Wonder Spices For A Healthier Life 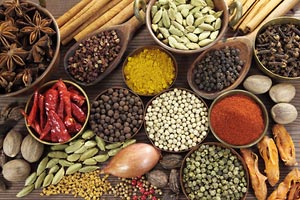 If you are looking for alternative ways to improve your health and have already started to change your lifestyle, you might like to consider including more spices in your diet too.

Most spices offer tremendous health benefits, and to enjoy them you’re not limited to eating them in red-hot spicy curries either!

Spices come from the barks, stems and seeds of plants and have been used for thousands of years to flavor foods and treat illnesses. Since records began spices were highly prized and often worth their weight in gold! Thousands of sailors died trying to find a route to India, until Portuguese navigator, Vasco Da Gama, found a way in 1498 and discovered the source of many of the valuable spices we still use today.

Alkalizing foods have a tonic effect on the body, and all spices are alkalizing. By neutralizing the acidity in the bloodstream, alkaline foods act as a ‘breath of fresh air’ to the system regenerating and restoring damaged cells. Diets high in acidic foods cause the body to break down prematurely, the bloodstream carries these ‘acid bombs’ throughout the system wreaking havoc in their wake. Spicy foods also increase the cognitive functions of your brain.

There are many spices to choose from, and most people are familiar with the popular ones such as basil, black pepper, clove buds, coriander and garlic. Here are some spices that offer outstanding health benefits that you may not be using as regularly;-

Spices are most commonly used to liven up our food dishes, but what most don’t realize is that certain spices can actually help you lead a healthier life whilst making your food taste good. So the next time you’re planning your dinner menu, think to yourself, ‘What could I be doing for my health when I include spices in our favorite recipes tonight?’

Foods That Improve Your Mood

Tips For Eating Healthier This Summer

Can You Eat Your Way To Thicker, Fuller Hair?

Feed Your Brain As Well As Your Body