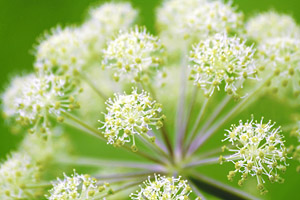 As the name implies, angelica root essential oil is obtained from the roots of the herb Angelica archangelica, which belongs to the Apiaceae family of plants.

It is also known as European/Norwegian angelica or garden angelica and has been used as an important healing herb throughout Europe for over a 1000 years.

In Europe, it is the former sub-species that is cultivated for the production of essential oil, herbal medicine, food and liqueurs. Other related species include A. sinensis which is used to produce Chinese angelica oil, and in Japan oils are derived from A. keiskei and A. acutiloba. Wild angelica (A. sylvestris) is a species common to Britain that is occasionally used to produce angelica leaf oil.

Although angelica is a highly aromatic plant with leaves, stalks, flowers and seeds all containing essential oil, it is the oil obtained from the root that is considered the most valuable. The fragrance and flavouring industries both consider the root oil to be superior to all other types, and when used in aromatherapy, angelica root essential oil is also considered the most therapeutic type available to the aromatherapist.

Originally native to Northern Europe, angelica is now cultivated on a grand scale in Belgium, China, Czech Republic, France, Germany, Holland, Hungary, India, Poland, Slovak Republic and USA. It is grown for traditional use in herbal medicine, or for the essential oil needed in the production of various alcoholic beverages.

Angelica is a large, robust, biennial herb with large broad leaves that divide into leaflets, and a stout, fluted purplish stem which splits into numerous branches that can easily reach up to 2 metres or more in height. The root of seedlings attains maturity within 12 months, but the small parasol-shaped white or yellow-green flowers that form large umbles (flower clusters) do not bloom until the second year when the tall stem shoots up. As they mature, the flowers produce small oval seeds.

The root system consists of a large underground rhizome (storage root) with many taproots and rootlets that spread wide but not quite as deep. Plenty of water is required during cultivation otherwise the roots will not develop fully, resulting in a reduced yield of essential oil. In the wild angelica prefers to grow in high mountainous regions, moist forests or along creeks and riverbanks.

Angelica herb was first used over 1,100 years ago when Viking settlers in Iceland discovered the herb growing among the volcanic rocks, and it soon became established as one of the most important medicinal plants of Scandinavian countries. The marauding Vikings planted the herb wherever they settled and traded it during their travels across Europe, eventually leading to the root becoming a major export commodity from Scandinavia to Europe until the early 1500’s.

Angelica was arguably the most popular herb of the Middle Ages due to the belief it was a panacea for every ailment. All parts of the herb were eaten or used to treat conditions such as arthritis, colds, coughs, bronchial complaints, fevers, indigestion, insomnia, poisoning, and to stimulate the appetite. It reigned supreme as a defence against infectious diseases and was considered a powerful purifying agent by influential physicians throughout Europe.

In China, angelica was known as the ‘empress of herbs’ and is still one of the most widely consumed herbs second only to ginseng, and is used to treat circulatory and respiratory conditions, colds, fertility and menstrual problems, and as an alternative to artificial hormones during menopause.

To obtain the highest quality essential oil and yield, the roots of angelica are harvested during dry weather in early autumn when the plant enters dormancy. Lifting the roots is laborious work since it is usually done manually, and great care is needed to avoid damaging them. The roots are cut into large pieces to expedite the removal of stones and soil, after which they are washed and immediately placed in an artificial dryer for a few days.

Extraction is achieved by steam distillation which produces a pale straw or golden coloured essential oil with a complex herbaceous aroma with woody, earthy, slightly musky undertones and a green peppery-spicy top note. The unique and tenacious characteristics of this oil hold it in high esteem with the perfumery industry and to flavour Bénédictine, Chartreuse, gin and vermouth.

Despite the herbs highly revered history, to date, angelica root oil has not been embraced much within the aromatherapy industry. However, aromatherapists often discover its true value when all other oils have failed to produce the desired results.

Respiratory and digestive conditions, eczema and psoriasis, nervous disorders and even anorexia often respond positively to treatments with angelica root oil where treatments with other essential oils were unsuccessful. In cases of stress, anxiety and nervous exhaustion angelica root essential oil brings a strengthening action to the nervous and glandular systems. When used to treat oedema or as a detoxification treatment its reputation as a cleansing agent can be witnessed firsthand.

Angelica root oil is mildly photo-toxic, although the amount and number of furocoumarins varies according to origin and processing. To be safe avoid any form of ultra-violet light for 12 hours after treatments.