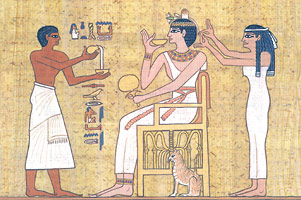 Aromatherapy has a long and proud history with roots that date back thousands of years. From its early mystic and spiritual associations to its modern day integration into everyday life, the aromatic medicine that eventually became aromatherapy has been a presence in every age since before the birth of Christ.

The use of aromatics was first recorded in human history at around 3,500 years BC by the Egyptians who were famed for their use of infused oils. It was their development of aromatic medicine that created the first foundations that modern aromatherapy was built on.

One of the first recorded uses of aromatic oils took place during the third dynasty in Egypt (2650-2575 BC). During this time the ancient Egyptians were developing the processes used in embalming and mummification, and both procedures used various aromatics such as frankincense, myrrh, galbanum, cinnamon, cedarwood, juniper berry and spikenard in their formulations.

Egyptians also used aromatic oils and incense to create the right atmosphere and to fragrance their environment. During festivals and celebrations women would wear perfumed cones on their heads, and these would slowly melt in the heat and release their aroma. After bathing they would anoint their bodies with infused oils to lock in moisture and protect their skin from the sun.

Between the 18th and 25th Egyptian dynasties, the use of aromatics in incense, medicine, cosmetics and perfumes was further refined. However, as their empire diminished, the Egyptian’s domination of aromatic medicine fell into decline.

Europe now became the heart of empirical medicine as the ancient Greeks began expanding the boundaries of plant-based medicine. Asclepius, the earliest known Greek physician, combined herbs and surgery with some skill as far back as 1200 BC, which earned him the deification title of ‘the god of healing’ after his death.

However, one of the most famous physicians whose beliefs would be a major influence in aromatherapy, was Hippocrates. He was the first physician of his time to dismiss the belief that illness was the result of supernatural forces. To treat patients he would recommend aromatic baths and herbal infusions, plus he prescribed the internal use of herbs, such as fennel, parsley, hypericum or valerian to great effect.

It is believed that Hippocrates developed one of the key aspects of aromatherapy – the concept of holism. This is the belief that the body is an organism comprising of mind, body, and spirit, and all three should be kept in balance to enjoy good health. He taught that surgery should only ever be used as a last resort.

Herbs and perfumes became more popular in Greece following Alexander’s invasion of Egypt in the third century BC. Theophrastus of Athens was a philosopher and student of Aristotle who conducted thorough investigations into plants and how aromas affect emotions. This resulted in several botanical volumes and he is known today as the ‘founder of botany’.

Dioscorides was a military physician who followed the Roman armies to Germany, Italy and Spain so that he could investigate and describe plants in their habitat. He learned much about how they should be prepared and stored, and recorded their healing properties after using them to treat battle wounds.

One of the most influential Greek physicians was Claudius Galen (129 -199 AD), who began his career treating wounded gladiators with herbs and oil infusions. It was said that not a single gladiator died under his care and he quickly became the personal physician to Roman emperor Marcus Aurelius.

After the Greeks and Romans, it was the Persians who next pushed the boundaries of aromatic medicine to new heights. Some of the biggest names to champion the use of oils and herbs in medicine were Al-Razi and Ibn Sina. In later years Ibn Sina was known throughout Europe as Avicenna.

Some of these earlier influences were brought together in the Saxon ‘Leech Book of Bald’, written between 900 and 950 AD in England. This text contained knowledge of herbalism, magic, shamanism, and tree lore, in addition to descriptions of 500 plants, their properties and how they could be used. The returning Crusaders brought new remedies and aromatic medicines such as rose water, and as a consequence aromatics and herbs became more popular.

Aromatherapy as we know it today really started with the French chemist Rene-Maurice Gattefosse, who studied the medicinal properties of essential oils. He was followed by Jean Valnet who used chamomile, clove, lemon and thyme essential oils to treat battle wounds and gangrene during World War Two. By using essential oils in this way, they were simply using a more concentrated version of the infused oils used by the ancient Egyptians, Romans, Greeks, and Persians etc.

However, it was Madame Marguerite Maury who really developed what would soon become modern aromatherapy, and it is the work of this Austrian biochemist together with others like her that has helped to develop the versatile and effective discipline we know today.

The story of how aromatherapy developed from early plant-based medicine is fascinating, and if you would like to read a more on this subject, see my article, The History Of Aromatherapy.