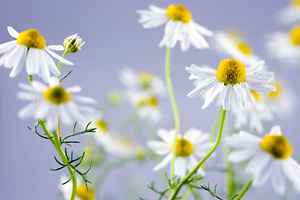 German chamomile (Matricaria recutita) essential oil is derived from a flowering medicinal plant that has truly stood the test of time, with over 2,000 years of documented medical use.

It would be almost impossible to find a herbal book published during the past 500 years that does not include the virtues of this amazing healing herb.

The ancient Egyptians are known to have used ‘chamomile’ in skin care preparations, incense, good-luck charms and medicine, and were so impressed with its curative properties for the ‘ague’ (acute fever) they dedicated it to their sun god Ra.

Throughout Europe and Russia the virtues of German chamomile have been used in compresses and massage to combat arthritis, rheumatism, sciatica, lumbago, gout, cramps, inflammation, vomiting, and a wide range of skin conditions such as acne, eczema, psoriasis and dermatitis. Taken internally as a tea or tincture it was used to treat colic, convulsions, croup, diarrhoea, earache, fever, heartburn and indigestion, insomnia, liver disease, period cramps, pyorrhoea, toothache, stomach ulcers and even as a remedy for cancer. German chamomile essential oil is used in aromatherapy for the same conditions.

Belonging to the Asteraceae family, Matricaria recutita is an annual aromatic plant producing an erect, round, branching stem reaching 40 to 60 centimetres in height. The green to dark green leaves are few and feathery, and each upper stem normally terminates in 1 or 2 single, daisy-like flower heads. The flower heads measure 2 to 4 centimetres across and consist of yellow tubular disk florets surrounded by 10 to 20 white strap-shaped ray florets.

Matricaria recutita is native to Europe and western Asia and has now been naturalized on almost every continent. It is one of the most important medicinal plants in world trade and is cultivated for the dried herb in many regions. German chamomile essential oil producing countries include north Africa, Argentina, west Asia, Bulgaria, Czech Republic, Egypt, France, Hungary, Poland, Russia, Slovakia, Ukraine and the United Kingdom.

To achieve the highest levels of chamazulene and a-bisabolol (the constituents responsible for its anti-inflammatory effect) in German chamomile essential oil, the flowers must be picked in the morning or evening at precisely the right stage of maturity. Experienced farmers conduct daily tests to identify when key components are at optimum levels before harvesting, since the level of certain constituents affects the value of the extracted oil.

After harvesting, the flowers are dried and steam distilled to yield a viscous, dark inky-blue oil with a powerful sweet herbaceous aroma that has fruity and tobacco-like nuances. German chamomile oil is generally considered a middle note when blending, and it is extremely persistent (long lasting). So use it carefully in blends or it will overpower the fragrance of any other essential oils you are blending with it. Of course this does not matter if you are using the oil for its therapeutic properties rather than its fragrance.

This species of chamomile oil produces a remarkable essential oil, and there is very little currently available to the aromatherapist that performs better when you need a powerful antispasmodic or anti-inflammatory action for a treatment.  Highly versatile, German chamomile oil is also excellent for soothing and healing skin conditions such as acne, dermatitis, eczema and psoriasis, whilst it’s relaxing and calming action to mind is both legendary and well proven against insomnia.

Although the anti-inflammatory properties of chamazulene and a-bisabolol extracted from German chamomile oil have been investigated and authenticated extensively, as is so often witnessed with other essential oils, their effects are often more pronounced when these constituents appear together naturally in the ‘whole’ essential oil rather than when isolated and used individually. This explains why the essential oil is so effective at bringing relief to arthritis, muscular pains and strains, rheumatism and other inflammatory conditions when used in massage.

This oil is often the first choice of aromatherapists when treating premenstrual syndrome, menstrual cramps, and a wide range of menopausal problems, as well as migraines and headaches. At a concentration of 25 mg/ml, essential oil of M. recutita also demonstrates antibacterial activity against such gram-positive bacteria as Bacillus subtilis, Staphylococcus aureus, Streptococcus mutans, and Streptococcus salivarius, as well as mild fungicidal activity against Candida albicans.

The Secret of Roman Chamomile Essential Oil is Revealed

All About Ginger Essential Oil by Quinessence