The Health Benefits Of Green Tea 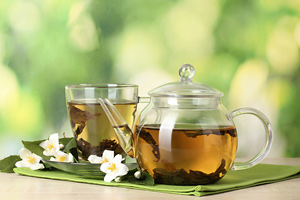 If you enjoy drinking tea then you will no doubt be aware of the wonderful range of different flavours available at your local supermarket grocery store.

Surprisingly, tea is still the most widely-consumed beverage in the world, second only to water.

It’s possible that you’ve already tried green tea while checking out the various flavours, but most people in the Western world still prefer the various forms of black tea and oolong. All these teas are derived from the same plant (Camellia sinensis), they are just processed differently.

However, there are a great number of reasons for you to switch to green tea, and it’s not just because it has a pleasant taste. Green tea probably has the most health benefits of any kind of beverage or food item we know about, and it may be an important way to protect your health and prevent disease.

In recent years green tea has received a lot of attention in scientific communities where it has been shown during research to be highly effective at preventing, and even treating many diseases, due to the high levels of polyphenol antioxidants found in this type of tea.
In fact, green tea contains epigallocatechin gallate (EGCG) which is one of the most powerful antioxidants.

Although black and oolong tea are also considered healthy, due to the way they are processed they lose most of their anti-oxidant properties. During research, green tea polyphenols have demonstrated greater antioxidant protection than vitamins C and E. Never underestimate the importance of antioxidants in your diet.

Antioxidants help to fight free radicals which are oxygen containing molecules that are created as a by-product of converting the food we eat into energy. Left unchecked, these free radicals damage our cells and DNA, leading to aging and disease. Therefore, the high concentration of antioxidants found in green tea is especially helpful at reducing your risk of disease.

Research into green tea has revealed the following findings:-

The western world may have only recently awakened to the benefits of green tea, but it has been around for centuries in China and Japan as the beverage of choice for the classes and the masses alike. The Chinese and Japanese have always believed that a regular intake of green tea means a longer, healthier life, and in the early 1990s scientists proved this belief to be true when a survey of 3,000 Japanese women showed that those who drank green tea lived longer than those who did not.

It requires no prescription, is readily available at most retail and online stores, and is very affordable. Simply include green tea to a healthy, well-balanced diet with regular exercise to enjoy better health and well-being, the natural way.

Deaths From Heart Disease Are Increasing – Are You At Risk?

The Importance Of Antioxidants In Your Diet

Simple Tips To Lower Your Cholesterol

Is Your Diet Aging You?