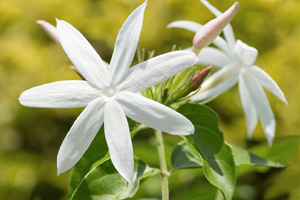 Research in 2002 helped to confirm the long held belief of aromatherapists that jasmine oil is a powerful relaxant that works as an effective aid to promoting restful sleep.

The researcher, Dr Bryan Raudenbush, explained that the purpose of the study was specifically to investigate some of the beliefs behind aromatherapy.

Raudenbush and his colleagues at the Wheeling Jesuit University in West Virginia, USA, found that people who slept in rooms fragranced with jasmine appeared to sleep more peacefully and report higher afternoon alertness than when spending the night in a Lavender-scented room, or one with no added fragrance at all.

‘We found they were just laying there, as opposed to tossing and turning’, said Raudenbush, speaking of the nights when people slept in a jasmine-infused space. ‘And scent really does matter’, he added: ‘Jasmine eased sleep better than not only no scent, but also lavender, an equally pleasing odour. Which shows that it’s not just the application of the pleasant odour, it has to be something specific to each odour.’ Raudenbush commented.

During the study, Raudenbush and his team monitored the sleep of 20 people over 3 nights. Each night, the investigators infused the sleeping quarters with a faint odour of jasmine or lavender essential oil or, as a comparison, no scent. The amount of added aroma was so small, Raudenbush noted, that some sleepers said they couldn’t smell anything different.

The authors presented their findings in 2002 at the annual meeting of the Society for Psychophysiological Research in Washington, DC. The researchers had found that when people slept in a jasmine-infused space, they moved less during the night. Although people slept the same amount each night, those exposed to jasmine reported feeling less anxiety when they woke up.

Raudenbush and his colleagues also gave study participants a test of mental function after they woke up, in which they had to match numbers to a symbol using a key that showed which number was linked to which symbol. Raudenbush and his team found that after sleeping in a jasmine-infused space, subjects could complete the test more quickly and accurately than in they did otherwise.

This finding suggests that people who sleep with jasmine scents experience a more productive sleep, enabling them to wake up more refreshed and alert than after sleeping the same amount on other nights, Raudenbush noted. Those smelling jasmine also reported feeling more alert during the afternoon hours of the next day than after other nights. Lavender essential oil also appeared to help with sleep and later awareness, Raudenbush added, but its benefits were not as noticeable as those seen with jasmine.

‘While most people probably can’t pump traces of jasmine into their sleeping quarters throughout the night, there may be easier ways to obtain the scent’s benefits’ Raudenbush suggested. ‘Many products contain jasmine, and a shower using Jasmine-scented soap before bed or the strategic placement of jasmine potpourri around the house could benefit sleep’ he said in conclusion.

It appears Dr Raudenbush is not familiar with electric diffusers or candle-powered burners, so perhaps we should donate one to help with further research into this subject! Seriously though, it is always nice to see scientific evidence that supports what we have been preaching and teaching for over 30 years.