There are several types of chamomile essential oil used in aromatherapy, and this makes it vital that you choose the correct type of oil for the therapeutic properties that you require. Roman chamomile essential oil is the most popular of the three types of chamomile oils used in aromatherapy, possibly due to its vast range of healing properties and amazing versatility. Most people seem to prefer the fragrance of Roman chamomile oil to that of either the German or Maroc, and it certainly blends well with a very wide range of essential oils.

The Latin name for Roman chamomile is most commonly given in aromatherapy and botanical books as Anthemis nobilis (Linnaeus), but there has been a growing trend of late to refer to this plant as Chamaemelum nobile. Both names are correct and do refer to the same plant and not a different sub-species.

Originally native to southern and western Europe where it grows wild in all the temperate regions, A. nobilis is an aromatic, herbaceous perennial with strong fibrous roots and long fibres. It belongs to the Asteraceae family and is a low growing, creeping plant with flowers and leaves reaching a height of up to of 25 centimetres (10 inches).

The fibrous root is perennial, the stems are freely branching, hairy and covered with feathery pinnate leaves. The wild growing variety has single white flowers similar to a daisy but larger, with a convex, yellow disk and numerous white, spreading, or reflexed rays. The cultivated variety has double white florets arranged around the yellow centre, which is known as the receptacle.

Also known as English chamomile, true chamomile and common chamomile, the 'noble' chamomile plant has been used since ancient times for its healing properties. Its history dates back as far as the ancient Egyptians who dedicated it to their Gods due to its curative properties, particularly when used for the acute fever known at the time as the Ague. Chamomile was also used by the Romans in medicines, beverages and incense.

During the middle ages this particular species of chamomile was commonly used as a 'strewing' herb which helped to create a fragrant atmosphere at public gatherings and celebrations. When walked upon, the essential oil sacs in the flowers would release their wonderful fragrance into the air. If you have ever strolled through a field of chamomile you will have experienced this for yourself.

Chamomile was employed for its bitter taste in beer during the middle ages, but was replaced by hops at a later time. I’m not sure if this was a good or a bad idea! Of course chamomile is still in popular use today to make the soothing and calming herbal tea.

Roman chamomile essential oil is now produced in many other countries around the world, such as Argentina, Belgium, France, Hungary, Italy and the USA. Of all these origins, the Roman chamomile oil produced in the United Kingdom is considered by many experts to be the very finest quality, and we agree. We only sell UK produced chamomile oils, and will continue to do so until we find a better source.

Depending upon the prevailing weather conditions in the U.K., harvesting takes place during late June or July although heavy rain often causes havoc to the schedules of the unfortunate English farmer. And as if that were not enough, the crop must be harvested at the precise time that it contains the highest yield of essential oil, so this can be quite a challenge, to say the least.

To determine when the time is precisely right for harvesting, a small test distillation must be done every few days so that the resulting essential oil can be analysed using gas chromatography. If the Roman chamomile oil is to meet the desired therapeutic quality for use in aromatherapy, certain constituents of the oil must also be at a specific level within the plant, prior to distillation.

Harvesting will not begin until the analysis results show that the essential oil meets the predetermined quality parameters, and the forthcoming weather is suitable and stable. My experience with farmers has taught me they have developed an amazing ability to predict the weather, often more accurately than even the met office with whom they check daily.

Once all the conditions are right harvesting begins, and for one large producer in the U.K it can take up to two weeks to cut the chamomile in all of his fields. After cutting, the crop is allowed to sun-dry for a short period before being steam distilled to extract the beautiful pale blue Roman chamomile essential oil. The flowers typically yield between 0.4 and 1.0% of essential oil.

Roman chamomile essential oil is one of the most versatile of all oils used in aromatherapy coming only second, in my humble opinion, to lavender. It is a powerfully soothing and calming oil which imparts this quality to both physical and emotional conditions alike. Although more expensive than lavender, a little goes a long way with this oil and its calming and sedating properties will out-perform lavender any day of the week.

Although Roman chamomile oil does not contain the large amounts of chamazulene found in German chamomile, it still has a noticeable anti-inflammatory effect that soothes sprains and swellings when used with a cold compress. Aching muscles and joints benefit tremendously when using it in massage blends, baths and compresses. It has an antispasmodic effect that is highly effective for soothing abdominal or period cramps as well as easing nausea.

During the hay fever season Roman chamomile essential oil offers some welcome relief to sufferers when inhaled from a tissue due to its anti-allergen effect. It offers similar relief to allergic rhinitis and dust allergy sufferers, bringing soothing comfort to irritated and inflamed nasal passages. In a similar way it calms and soothes the airways for asthma sufferers too.

And finally, vaporizing Roman chamomile essential oil is the perfect way to quieten noisy children, angry partners, and your frazzled nerves - without inducing a catatonic state. That sounds to me like aromatherapy at its absolute best!

To learn how, simply enter your details below to receive your Free Aromatherapy Tips Ebook download plus a subscription to our Free Newsletter containing exclusive discounted Special Offers, Expert Articles, Skincare Tips, Recipes and much more. 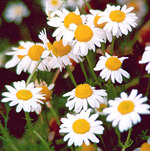 The Greeks called the herb chamomile 'ground-apple' because of the apple-like fragrance released when walking on the growing flowers. This led to it being used in the middle ages as a 'strewing' herb.

The word chamomile is derived from 'kamai' (on the ground) and 'melon' (an apple). 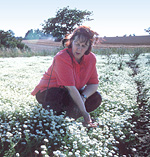 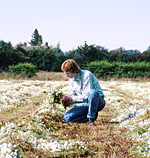 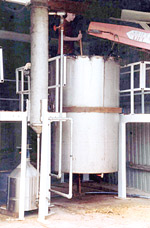 Top: Sue studies the flowers development. The crop must be harvested at the precise time that it contains the highest yield of oil, and preferably whilst the ideal weather conditions prevail.

Centre: One day after cutting, Geoff inspects the drying chamomile flowers. As you would expect, the timing of this process is absolutely critical too.

Above: After the flowers have dried sufficiently the workers begin charging the still with the plant.

“I have just received my first order from you, and your high standards and beliefs truly reflect in the quality of your products.

I have used several suppliers in the past and none can compare. You can be sure that I will be using you as my regular supplier from now on.”

17 Ways To Use Essential Oils Around The Home

Discover lots of easy ways to experience the joy of essential oils by create a beautifully relaxing, fragrant haven, - right in your own home!

Simply enter your name and email address below and we will email you the link to your FREE eBook, plus you will receive a subscription to our newsletter 'Aromatherapy Lifestyle' containing exclusive, hugely discounted Special Offers, expert Articles, Skincare tips, Recipes and much, much more.