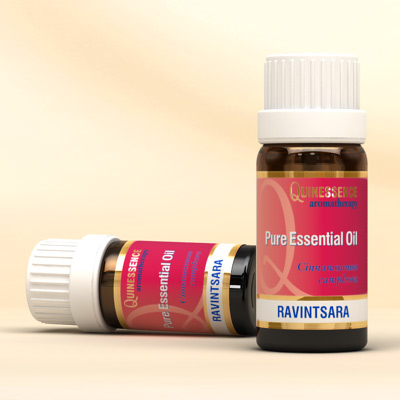 Antibacterial, invigorating and clearing. Ravintsara Essential Oil has powerful antibacterial properties that can be used effectively during the cold season. Inhaling its vapours or adding a few drops to a vaporiser helps to keep airways clear. Similar in action to eucalyptus oil, but generally believed to be more powerful.

Ravintsara is the essential oil first described in the ground-breaking aromatherapy book ‘L’aromatherapie Exactement’ by Pierrre Franchomme and Dr Daniel Penoel, released in 1990.

Although the authors stated it was derived from Ravensara aromatica, the chemical profile they provided in the book makes it clear they were actually describing an essential oil obtained from a different species that has only recently been correctly identified and taxonomically re-classified as Cinamomum camphora c.t. cineol. The essential oil from this species is known as Ravintsara.

Obtained from the leaves of a tree native to Madagascar, Ravintsara Essential Oil has a sweet, soft camphoraceous and herbaceous aroma, with woody back-notes that make it similar to, but softer than eucalyptus. It is an excellent booster for the nrevous sytem and can be used in aromatherapy massage blends to maintain the immune system.

Please see the information below for further clarification about the differences between Ravintsara and Ravensara essential oils.