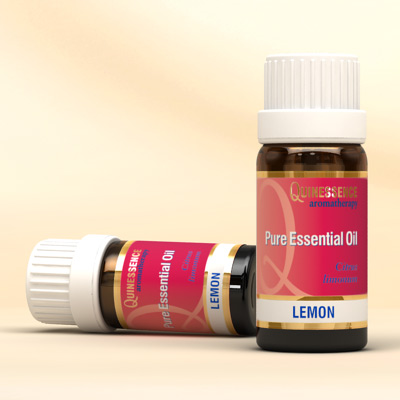 Antiseptic, revitalizing and uplifting. Lemon Essential Oil has an impressive list of therapeutic and antiseptic properties, making it a valuable contribution to any blend due to both its remedial action and delightfully fresh, crisp citrus aroma that helps keep the mind clear and alert.

Use Lemon Essential Oil in body massage treatments or add a few drops to a warm bath to help maintain a healthy immune system or recharge your system after illness. 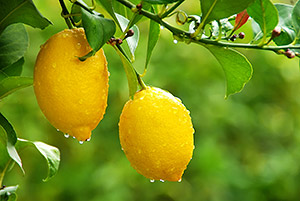 Lemon essential oil (Citrus limonum) is very popular in aromatherapy because it has a wonderful fresh aroma, delivers an impressively large number of health benefits, and is extremely inexpensive.

Few essential oils offer the same therapeutic prowess within the same price range of lemon, and this is probably due to the fact that both the fruit and essential oil are produced on a grand scale.

Lemon is arguably the most versatile of all the citrus fruits, being employed in a vast assortment of food, beverages, skincare, perfumery and toiletry products. In addition, the lemon contains the most comprehensive range of medicinal properties of all citrus fruits.

After sweet orange, lemon probably ranks second (or joint second) with grapefruit as the most commercially important citrus fruit in the world today.

Surprising as it may sound, the precise origin of the lemon tree has never been established. Most experts propose it was Eastern India, with a minority of others suggesting it was upper Burma or China. Like many other citrus fruits, the lemon has been hybridised so many times throughout history that it seems unlikely we will ever establish its true provenance.

Christopher Columbus took lemon seeds with him as he set sail on his second expedition to discover the New World in 1493, and they were planted on the island of Hispaniola which is now known as Haiti & Dominican Republic. From there, the lemon quickly spread to other nearby islands of the area then known as West Indies.

On his 3rd expedition Columbus discovered South America where he again introduced the lemon, though some accounts suggest it was missionaries who were responsible on this occasion. Argentina is now the world’s largest producer of lemon fruit, followed closely by Peru and Brazil.

It is also known that Franciscan missionaries introduced the fruit to California in the late 18th century, and by 1804 their first orchards of just 400 seedlings were thriving. California is now probably the largest producer of lemon essential oil in the world.

Citrus limonum belongs to the Rutaceae family, and is one of 16 recognised species of the Citrus genus. The small evergreen tree reaches a height of 5 or 6 metres and usually has sharp thorny twigs bearing oval shaped, dark green leaves. The fragrant flowers have 5 petals, white inside and tinged with pink on the underside.

The fruits are aromatic and oval in shape with a thin, pale-yellow rind and a juicy, very acid pulp. Unripe fruits are green and similar in appearance to limes. More about this later.

Californian lemons are harvested at any time after the fruits reach a 25% juice content, with the pickers using rings to determine the ideal commercial size. In Italy, it is common for the fruits to be harvested as early as possible and allowed to ripen during transport.

The essential oil is obtained by cold pressing the rind of the fruit, and is typically a pale yellow-green colour with the familiar fresh, clean and crisp lemon-peel aroma.

The lemon has been widely used throughout history for its healing qualities, having been first used in Ayurvedic and Chinese traditional medicine and then later adopted in European folk medicine. Lemon juice and honey, or lemon juice with ginger has been universally taken as a remedy for colds since records began.

Over the years, lemon juice has been taken internally to treat arthritis and rheumatism, digestive problems, dysentery, hiccoughs, jaundice and palpitations of the heart. In Italy, the sweetened juice was used to relieve gingivitis, stomatitis, and inflammation of the tongue, and today Spanish folk medicine credits so many medicinal properties to the lemon that entire books have been dedicated to it.

In the late 18th century it was discovered that fresh lemon juice was one of the finest treatments for scurvy which was the scourge of the Royal Navy, often with entire crews dying due to a lack of vitamin C. To the untrained sailors eye, over-ripe limes resembled unripe lemons, and both fruits were used as the cure for the disease. This eventually led to early American mariners giving British sailors the nickname of ‘limejuicers’, which was later shortened to the more familiar nickname of ‘limeys’.

Essential oil of lemon has an equally impressive list of therapeutic and antiseptic properties, making a valuable contribution to any blend due to both its therapeutic properties and pleasing aroma. Used in massage, it is helpful for poor circulation, cellulite, and facial spider veins.

It can be added to shampoo and conditioners for greasy hair, and likewise its astringent action works well in skincare creams to treat greasy, oily skin.

Like many citrus oils, lemon is a mild photo-sensitiser and should not be used neat on the skin prior to exposure to direct sunlight or UV sunbeds. However, when used with other essential oils as part of a typical massage blend, the risk of phototoxicity is virtually nil.

Its cleansing action is invaluable when treating boils and insect bites. In an emergency, one drop of neat lemon oil on a cut helps stop bleeding quickly due to its styptic (astringent) action. Use one drop only though, since over-use can sensitise the skin. At the first sign of a cold or sore throat, a few drops of oil can be added to warm water and gargled.

Vapourising lemon oil helps to clear the mind and sharpen focus, as was illustrated in a recent Japanese study which showed that whilst diffusing lemon oil throughout a busy office building, typing errors had decreased by 54%. It also helps to dispel negative emotions such as guilt, jealousy and regret. When vapourised, lemon can also help ease the symptoms of asthma and bronchitis.

Lemon blends easily with almost any essential oil, and when needed, it is particularly effective at rounding off the sweet edge of oils such as ylang ylang, geranium, rose and sandalwood. It also works well with Roman chamomile, cypress, fennel, juniper berry, lavender, neroli and other citrus oils.